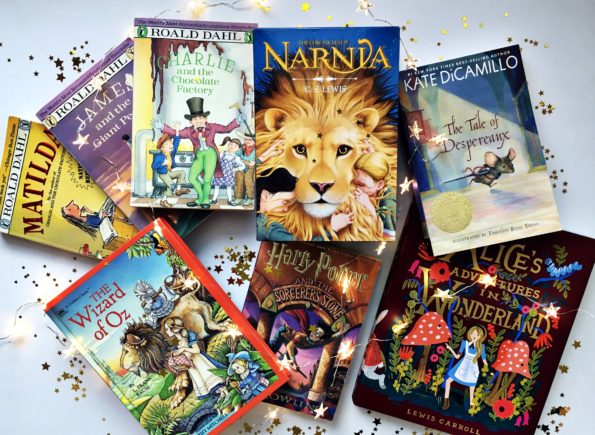 Since we have been reading longer books together lately, my kids are still working on The Wizard of Oz and Harry Potter and the Goblet of Fire this week. Instead of posting what my kids checked out at the school library, I thought I would write a quick post about a genre that’s really been working for us the past year, and why I think it works particularly well for a lot of kids.

A few people I’ve talked to about books automatically say, “Oh, I don’t read fantasy. I just can’t get into it.” But when I mention books like Harry Potter, they make an exception. Fantasy definitely includes books that are heavy with dragons, fairies, different realms, and a good dose of magic, and I can understand why people might not care for that specific category of fantasy. But when comes to a more realistic approach to fantasy, I think there are a few books that appeal to a pretty large group of people, and can help children understand and work through some big issues. These books feature regular humans who have special qualities, or animals who function as humans. They use regular characters and put them in extraordinary situations that just happen to include magic, but they are more easily relatable than characters in more hardcore fantasy novels.

As an adult, I enjoy reading books that are based in real life and deal with real issues. I like to see how different types of people react in tough situations. I love reading fantasy, but it’s more of a fun escape for me. For kids, however, while they may also like reading books about “real” people (The Baby-Sitter’s Club will always have my heart.), fantasy is a way to read about tough subjects while still keeping themselves a bit emotionally separated.

I’ll use Harry Potter as an example, since we’re all probably familiar with that story. The series covers some BIG topics, including the loss of parents, bullying, feeling weird or not like everyone else, being good (or not so good) in school, and the fact that there are evil people out there who seem to have no reason for it, and who don’t learn a lesson and reform themselves. Readers, those are major topics that could upset the toughest of adults. But in a fantasy setting, kids can identify with those characters, and see how they handle those difficult situations, but there is a bit of protection in place. Magic, other-worldly creatures, and invisibility cloaks all provide a bit of separation, and that allows kids to process those big ideas without becoming emotionally overwhelmed.

My 8-year-old and I have talked about how it isn’t magic that protects Harry from Voldemort, but his mother’s love, and how his mom is always providing whatever protection she can, even though she’s not there. That is a big, impactful subject, not necessarily easy to understand. But in the world of Harry Potter, it becomes a more manageable topic. My son couldn’t really be in Harry’s situation, because we aren’t wizards, but now he understands how a parent tries to protect a child, no matter what.

My 6-year-old has been loving The Wizard of Oz more than I thought, and he has made several insightful comments about Dorothy wanting to go home and why the scarecrow, tin woodman, and lion might want what they want from the wizard. It also illustrates the idea of good versus evil, and how terrible accidents can happen, even when you didn’t mean for them to. (Dorothy really didn’t mean to kill either witch!)

If you think your kids won’t like reading fantasy, or you’ve always viewed it as a fluffy genre, give some of these books a try! Especially if you have a highly sensitive, or more sensitive, child, it might be a nice way to read a fun book and have some great conversations at the same time. These books all feature characters who must overcome some kind of adversity and deal with big, important issues in a fantastical way that is way easier for kids to understand than a more straightforward book might be.

The Wonderful Wizard of Oz

(I classify this as partial fantasy, because there is some magic involved, and the setting is certainly not in the real world.)
Charlie and the Chocolate Factory

James and the Giant Peach

The Chronicles of Narnia

The Lightning Thief (Percy Jackson and the Olympians, Book 1)

The Land of Stories series

The Tale of Despereaux: Being the Story of a Mouse, a Princess, Some Soup, and a Spool of Thread