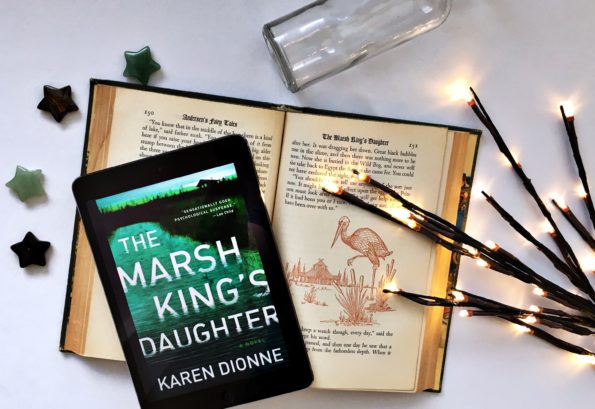 Thanks to Netgalley and Putnam for providing me with a digital galley of this book – all opinions are my own!

Memories can be tricky, especially those from childhood.

Ripped from the headlines stories can be tricky. Too much detail, and it seems indulgent and grotesque. Too little and it can be, frankly, boring. Karen Dionne’s The Marsh King’s Daughter

is no regular ripped from the headlines story, but she takes inspiration from a few and has twisted them into a wonderful suspenseful fairy tale of a book.

Helena Pelletier has an idyllic life in the UP (Michigan’s Upper Peninsula). A loving, supportive husband, two daughters, and a jam-making business that is flourishing. What no one, including her family, knows, is that her mother was a famously-abducted teenager, and her father, the abductor, has been in prison for 20 years. Helena’s childhood was spent in a cabin deep in the woods of the UP, unaware that a society existed outside of her small world. When she and her mother escape, she acclimates to the “new” world and sheds her past as soon as she is old enough to change her name and leave it all behind. Now her father has escaped, and Helena has to face both her fear and childhood love of him, all while trying to find him before he finds her family.

This is one the best, most well-written books I’ve read this year. I absolutely loved it, and Dionne’s storytelling abilities are out of this world. There is definitely suspense and mystery in this book, but I also found a lot of fairy tale elements woven in. A young girl kept captive, unaware of the outside world. An evil male figure and his cowed counterpart. There are some mystical aspects of Native American culture woven in, rather than real magic, but they serve as the magical element of this suspenseful fairy tale. What I really enjoyed most was the dichotomy between Helena’s hatred and love for her father (and her mother). As a child, she revered him. She knew he could be mean and harsh, but he was still her father, and he taught her how to hunt and fish, and she loved him fiercely. Once she discovered the truth about her mother’s kidnapping, she hated him for it, but that familial love never really goes away. Even after 20 years, she knew her father well enough to know exactly where he would go after escaping prison, and even though she is hunting him down like prey, it also feels like a game of hide and seek between father and daughter.

. Andersen’s story is about a girl named Helga who is born to the wicked Marsh King and a fairy princess. She takes on attributes of both parents, and is only able to be freed once she feels compassion for another person and rids herself of her father’s characteristics. The parallels between that story and Helena’s struggle with her feelings for her father are striking and very well done. I really liked the way Dionne mixed in an old fairy tale with Helena’s story, and used it to solidify the struggles Helena faced when it came to her feelings for her parents.

If you like suspense, mystery, or fairy tales, this is a truly compelling story that combines all three into an amazing book. I cannot recommend The Marsh King’s Daughter

, because I think I’m too sensitive to read that particular subject matter, but I have heard from others that this book is very different. If you’re concerned about the content (it does involve a child being kidnapped and impregnated against her will), the focus is not on the relationship between Helena’s father and mother, so I don’t think it will be a problem in that regard.

EXTRA! EXTRA!
Although I was provided with a review copy of this book, I ended up listening to a lot of it on audio and the narration was extremely good! I listened every chance I got, and at one point hid in my room away from my family so that I could finish it. So whether you use your eyes or your ears for this one, you can’t lose!