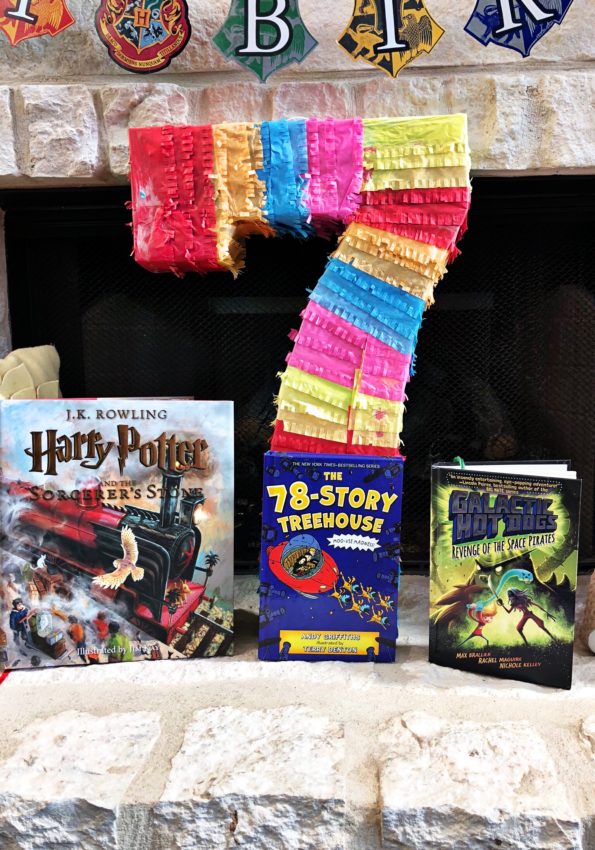 Because he’s my son, he loves Harry Potter, although not as much as my 9-year-old. I think it’s an age thing, and that he’ll be reading them on his own in a year or so. In the meantime, we’re reading the illustrated versions because . . . well, let’s be honest, don’t we all love illustrated books?? These versions are so beautiful, and make the series even more fun for young (and old) fans. He still isn’t super into long chapter books, so the illustrations help a lot. (Although I think the audiobooks might be his absolute favorite. Because Jim Dale is amazing.)

I know I’ve mentioned this series before, but I cannot recommend it enough! This is the 6th book in the series, and the 7th book (which is already out in Australia) will be out this summer. I used to not be a fan of graphic novels, but my kids have made me realize that they’re actually amazing for young readers. And a series about two boys living in a massive treehouse, with features such as man-eating sharks, a lemonade fountain, and a time machine? Yes, please! This is perfect for elementary-aged kids who need fast-paced books and engaging storylines in their books. This is the series that my 7-year-old (I cannot believe he’s 7!) can’t wait for the next book.

Alright, y’all. This is one of those books that I raised my eyebrows at, starting shaking my head no, but my 7-year-old begged me for it so I said yes. It is . . . I’m not sure ridiculous is really descriptive enough, but I will say that fans of the Treehouse books, Diary of a Wimpy Kid, and Dog Man will absolutely love. This series is about a boy named Cosmoe who is the captain of a flying food truck called the Neon Wiener. (Nope, I am not kidding.) He meets all kinds of interesting alien beings on his travels and gets himself into plenty of sticky situations. In this one, he is captured by space pirates during a hot dog eating contest. My 7-year-old would only eat hot dogs if I let him, so this series is truly perfect for him. It’s silly, funny, well-illustrated, and keeps his attention for far longer than I want to read about galactic hot dogs. If you’re ok with some slapsticky, borderline potty humor, this book is perfect for young to middle-grade readers who like funny adventure stories.

I can’t wait to see what books he loves next year!