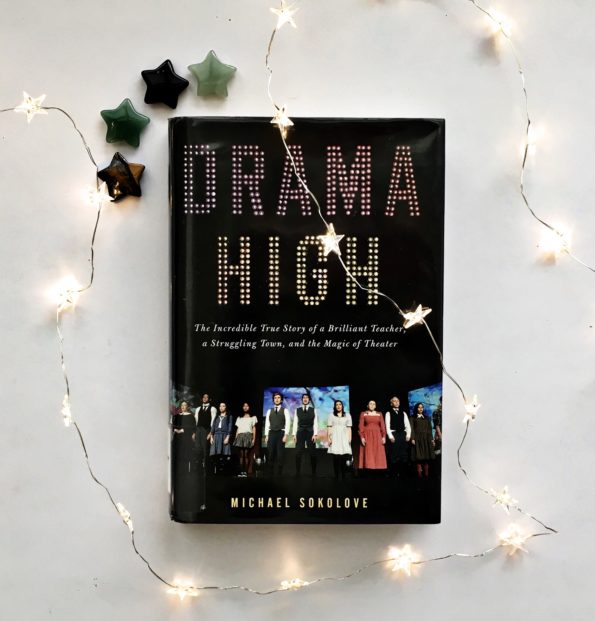 Drama High: The Incredible True Story of a Brilliant Teacher, a Struggling Town, and the Magic of Theater

Theater gives them what a computer takes away, what no classroom teacher can teach. They learn to work with other people. They learn patience and tolerance and how to be deferential to each other. They learn to be good citizens. It’s unifying. It has an impact on kids that can’t be quantified. Educators don’t know how to measure it.

If you’ve seen the new TV show Rise, you’re probably familiar with the culture of some high school theatre programs. What you might not know (I didn’t until Kate at Kate Reads Books posted about it) is that the show is based on this book, Drama High

by Michael Sokolove. It’s the story of a real theatre group that really struggled with support and budget (as most theatre programs do) that ended up becoming one of the most highly respected drama groups in the country.

Lou Volpe became the theatre director at Truman High School in Levittown in 1970. His first show, Antigone, had no set and the actors wore trash bags and aluminum foil. He had no history in theatre, except for loving it. But he was more than dedicated to the shows he produced and the students who starred in them. He worked just as hard as the students, and in return a deep, mutual respect evolved. Volpe’s students trusted him and his direction outright, and he trusted that they would put all of themselves into every performance. That kind of dedication is what lead Broadway producers to travel to Levittown to watch those high school performance and to test out edited versions of big Broadway shows (such as Les Miserable, Rent, and Spring Awakening) to see if they would work for other high schools. Volpe, who recently retired, left quite a legacy, and this book explores that journey.

So before I give you my thoughts, let me say that I was (and always will be, really) a theatre kid. I was in theatre, choir, and show choir in high school, in a small town, and those places were truly havens for me. I felt at home in the theatre. So when I read Drama High

, I had a happy trip down memory lane. This is a really great book. Lou Volpe and his drama department are absolutely worthy subjects for a novel, not to mention Levittown itself. I really enjoyed reading about Volpe’s history, the history of the town, and the students Volpe taught. That being said, some of the town history sections became a bit heavy and repetitive and could have been cut down. (The author is clearly an amazing researcher, and it felt like he wanted every detail included.) In my opinion, cutting 25-50 pages out would have made the book a smoother read, but it’s not a reason to not pick up this book!

If you have any interest in the subject of theatre, if you love theatre, if you want to read about the true story behind Rise, or if, like me, you were a drama geek in high school, I definitely recommend Drama High. It’s a great non-fiction read, and you’ll learn a lot about the culture of high school theatre and what it takes to survive in a small town.