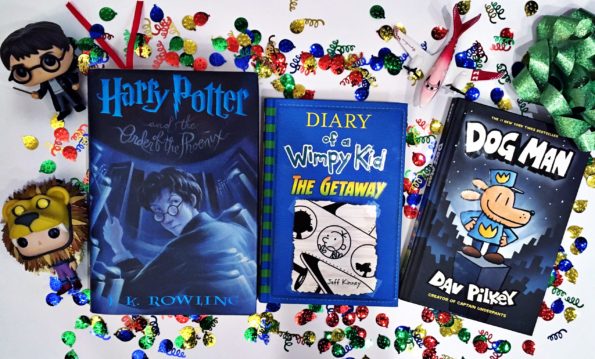 In honor of my son’s 9th birthday today, I thought I would post what his favorite books of 2017 were. (Don’t worry, I’ll have the adult version coming next week! This week has just been very kid-centric!) I asked him, and it took him less than 20 seconds to come up with these. When you know, you know!

Harry Potter And The Order Of The Phoenix

We are about 3/4 through this book, and it’s already his favorite of the series. (Followed closely by Harry Potter and the Prisoner of Azkaban.) This kid is a die-hard Harry Potter fan, and one of my favorite things of 2017 has been to watch him become that fan. The fifth book is much darker than the previous four, but he’s been loving it, and lugging around my hardcover copy of it to school to read in any spare moments he has. If you have an 8-year-old who’s shown even the slightest interest in Harry Potter (or if you’re an adult who hasn’t read them yet), give them the first book and get started!

Diary of a Wimpy Kid: The Getaway

This is the newest in the Wimpy Kid series, and my son knew the release dates months before and was counting down the days. He read it in a day or two and declared it the best one yet. These books are silly, and probably slightly inappropriate, but when it comes to books I’m a little more lenient! This one also takes place during the holidays, so if you’re looking for a book to get for a reluctant reader, or a reader who doesn’t have the newest one yet, go for the Wimpy Kid books. I haven’t met a kid yet who doesn’t like them!

This is another graphic novel, this time from the author of the Captain Underpants series, Dav Pilkey. It’s a comic, Dog Man, written by the two main characters, George and Harold, from Captain Underpants. As you might expect, this book (also a series) is silly, funny, and absolutely ridiculous. So of course my son (both of my sons, actually) love it. I’m glad that authors such as Dav Pilkey and Andy Griffiths are making reading fun for kids. It’s easy to get bogged down with all the books we think our kids “should” read, and sometimes that makes them think reading isn’t fun. Dog Man is definitely fun, and I’m sure we’ll be adding more of this series to our collection!

So that’s my older son’s list of favorite books this year! After his birthday and Christmas gifts, his TBR pile will get a little longer, and I’m interested to see what will be on his list of favorites next year.