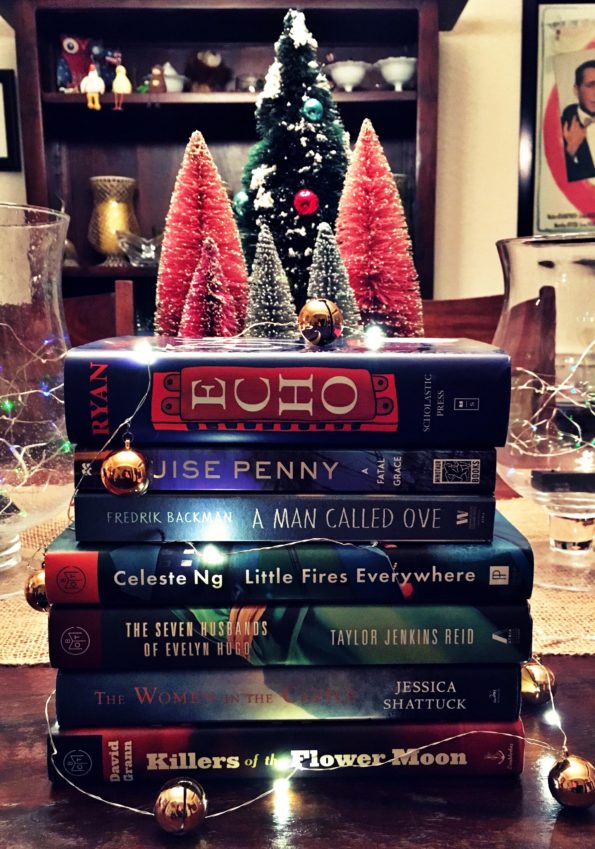 I can’t believe it’s almost 2018!!! This year flew by, and while I’m extremely grateful that I had a pretty great year, sometimes I wish that time would slow down just a little. My kids appear to be growing faster with each blink of an eye, and with that comes the realization of the importance of slowing down. (I have some thoughts on that I’ll be posting about soon!) Slowing down in the new year to read more to myself, more to my kids, and to spend more time writing for myself are just a few things I’m reflecting on as 2017 comes to a close. But right now, you’re here for the books, so let’s get into it!

So far this year, I’ve read 68 books. This might sound like a lot, but I know other book bloggers who regularly read over 100 books a year. This was a lot for me . . . and I loved it! I’m working on a 2018 Reading Challenge (that we can all participate in), and one of my personal goals is to read even more in 2018. For now, here are my favorite books of 2017!

on Audible and loved it so much that I bought the book and plan to re-read it, maybe in 2018. I cannot recommend this book, on paper or audio, enough. Yes, it is classified as a middle grade book, but if I hadn’t known that, I would have just thought it was a wonderful, emotional historical fiction book about three kids and their experiences during WWII. Each child’s story is centered on how music plays a role in her or her life, and how their love for music is hindered by the war. This book was beautiful, broke my heart, and still has me thinking about it almost 6 months later. Echo is a masterpiece, and one of my all-time favorite books.
Read my review of Echo HERE.

Celeste Ng is one of the best authors out there, and Little Fires Everywhere

is as close to perfection as you can get in literary fiction. This is the story of a perfectly planned community, a perfect-on-the-outside family living there, and what happens when a single mom and her daughter move to town and things start to change. Whether those changes are for the better or the worse depends on who’s looking at the situation. I could not put this book down once I started it, and I’m still thinking about it. The writing is beautiful, but not in an overbearing way. Ng is a master with words, and this book entertains while also making you think, perhaps even question your own values and world views. This was my very favorite book of 2017, and is absolutely an all-time favorite.
Read my review of Little Fires Everywhere HERE.

was so amazing it found its way in. David Grann writes about a subject that I was aware of but didn’t know a lot about: the Osage Indians and sinister plot to kill them off in order to get their oil money in the 1920s. This read like fiction, and I’m glad because it’s an important story that people should know more about. American Indians have a sad history in America, and this book highlights one of the reasons why. It is powerful, and I can’t wait to see what Martin Scorsese does with the movie version.
Read my review of Killers of the Flower Moon HERE.

, and if you haven’t read it yet I beg you to. At the outset, it appears to be a novel about a grumpy old man who hates his neighbors. What it’s really about is how much that grumpy old man loved his wife, what their relationship meant to him, and how he survives without her. Ove has so much heart and so much compassion (underneath that prickly exterior) that you cannot help but love the main character, as well as the entire book. Backman is a true wordsmith, and I laughed and cried throughout the book, sometimes on the same page. A Man Called Ove is one of the most well-written books I’ve ever read.
Read my review of A Man Called Ove HERE.

is one of those books I just could not put down (or stop listening to-I listened to part of it on audio) this year. Part fairy tale, part suspense novel, it weaves a tale of a woman who was born to an abducted teenager and is now making her life as normal as possible, complete with a new name. When her father escapes from prison, she has to find him before he finds her and her family. This is such a compelling story, and Dionne is a wonderful storyteller. I loved the mystery and suspense, and especially loved the way Helena, the main character, both loved and hated her parents for a variety of reasons. It felt very real, and I was invested in the characters.
Read my review of The Marsh King’s Daughter HERE.

as my BOTM pick, I thought it might be a light, summer read. It is so much more than that, and Reid is one of my favorite authors now. Evelyn Hugo, an actress far past her career, decides to tell her life story, including the stories of each of her seven husbands, to a journalist for a tell-all book. No one is sure why Evelyn has decided to do this, but as the book goes on, her reasons become clear. Aside from writing itself being fantastic, the story is engaging, heartbreaking, and thought-provoking. I have recommended Evelyn Hugo to so many people, and I will continue to do so until everyone has read it!
Read my review of The Seven Husbands of Evelyn Hugo HERE.

WWII books are usually popular with fans of historical fiction. I am definitely in that category, and Jessica Shattuck’s The Women in the Castle

was different than other WWII historical fiction novels that I’ve read. This is based on a real group of resistance fighters who tried and failed to assassinate Hitler, and whose spouses were left widowed during WWII. While the war itself is touched on, the story really delves into how these women survived after the war. The most interesting aspect is that they are all Germans, a group we are generally told not sympathize with, trying to survive regular life after the war. This book takes a look at what happens after a war, in the losing country, and how regular citizens keep going, no matter what. It is a wonderful story that had me looking for more to read about this group of people.
Read my review of The Women in the Castle HERE.

If you are a Louise Penny fan, I know that I’m preaching to the choir when I say that this is one of my favorite series ever. Inspector Gamache, the lead detective in Penny’s series that takes place in Canada, is one of the best detective characters out there, right up with Hercule Poirot. A Fatal Grace

is the second book in the Gamache series, and it was even better than the first. A much-disliked woman is electrocuted on an ice rink during a curling match, and Gamache must figure out who had a motive (everyone) and who actually did it, and why. This is the ultimate cozy mystery series, and I hope to read the rest of Penny’s books in 2018. If you haven’t tried Penny yet (start with Still Life), get started and meet me in Three Pines!
Read my review of A Fatal Grace HERE.

This is my favorite dystopian novel of the year, and one that I will probably re-read in the future. It is reminiscent of other dystopian novels about women, but adds a new angle that I loved. In Gather the Daughters

, there is a society of people living on an island. The men are in charge and the women are breeders only. Their only time of freedom is during the summer as children, when they are allowed to run wild until the age of puberty. One summer, one of the daughters sees something she shouldn’t, and it sets into a motion a plan to end the patriarchal civilization, maybe for good. This book was wonderful and disturbing, and I couldn’t stop reading it until I got to the end. I really cared about the characters, was worried for them, and I hope that Jennie Melamed has plans to write about what happens to them in the future.
Read my review of Gather the Daughters HERE.

I read The Other Einstein

over the summer as part of the Big Library Read, and it was a surprise hit for me. Marie Benedict tells a fictional version of Albert Einstein’s first wife, Mileva Maric, and her relationship with him, as well as her contributions to science. This is a wonderful historical fiction novel, and in addition to making me want to find out more about Mileva, it caused me to really think about gender roles in science and in the past, and how much has changed. (And how much really hasn’t.) I loved this as a historical fiction book and as a story of a strong woman who made the best of impossible circumstances.
Read my review of The Other Einstein HERE.

I have to mention these two as well, because I couldn’t put them down! Neither are books I probably would have chosen would it not have been for the amazing bookstagram community and Book of the Month Club.

Cate Holohan’s Lies She Told is tense, fast-moving suspense novel about a writer whose real life starts to blend fiction and reality. There is a murder, a cheating husband, and you don’t find out the truth until the very end. It’s a great suspenseful read.
Read my review of Lies She Told HERE.

Riley Sager’s Final Girls is like a slasher film on paper. It’s about several girls who, separately, have been the final girls left after a mass murder. Someone is trying to pick off those remaining girls, and Quincy Carpenter, the main character, has to figure out who is after her. This is a page turner, and while I do not watch horror films, I couldn’t stop reading this.
Read my review of Final Girls HERE.