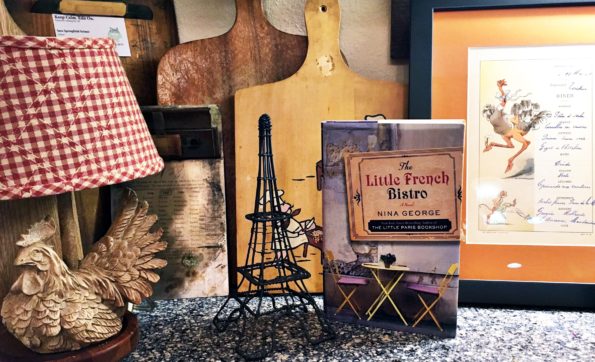 I received this book from the Blogging for Books program in exchange for this review. All opinions are my own.

“Things not done: that was what the dead had been trying to tell her. Unlived moments. Marianne’s life consisted entirely of unlived moments.”

Reinvention stories, especially ones that take place in France, are high on my list of always-love-to-read books. I love aftermath stories, and reinventing oneself after a major life event or realization is a great aftermath story. I was hooked at the beginning of Nina George’s The Little French Bistro

. When the second sentence of a book is “Marianne decided to die,” you have my attention. Unfortunately, that attention didn’t last throughout the book.

Marianne wants out of her life. She is stuck in a loveless marriage with a truly heinous husband, and I don’t blame her for wanting to leave. Marianne decides that the only escape route is death, and she attempts to drown herself in the Seine. She, of course, makes it out alive, and winds up on the coast of Brittany, working in a restaurant with a cast of eclectic characters. Over the days and weeks, Marianne is forced to face who she truly is and what she really wants out of her life, and she must make a choice before she is left with none.

I wanted to love this book, but I just didn’t. For the majority of the book, we only see Marianne through the eyes of the people she meets in Brittany. As interesting as the characters were, I wanted to learn about Marianne from her point of view, not just be told what other people thought of her from their limited interactions. There was almost zero character development for Marianne. She seems to go from a meek and cowed housewife to a strong heroine with not much evidence or story of how that occurred throughout the book. The only line, that was repeated throughout the novel, was, “she had forgotten who she was.” I wanted to see who she was before and how she got back to that person!

Nina George is obviously a talented writer. She wrote amazing stories for the side characters, and I really knew who they all were. It just felt like something was missing, namely character development for Marianne. I will also say that maybe I was not the right person for this book, because I know a lot of people love it. Let me know if you’ve read it and what you think!