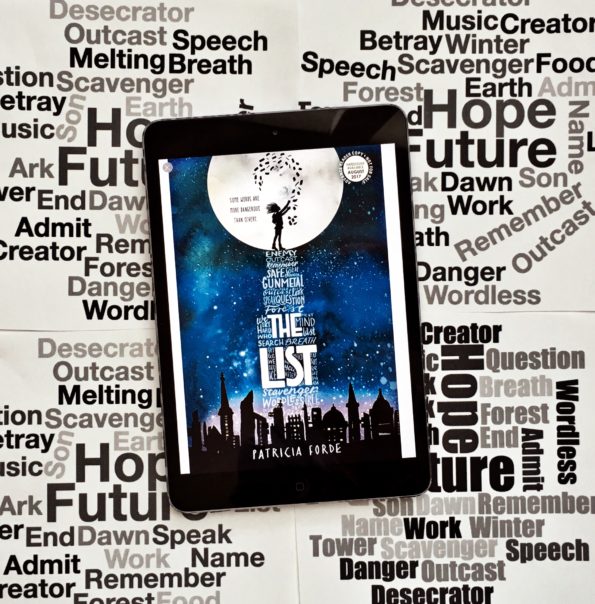 “Language is what makes man ungovernable.”

Thanks to Netgalley and Sourcebooks Jabberwocky for providing me with a digital galley of this book – all opinions are my own.

As a lover of both YA and dystopian novels, I was very excited to read The List

. I’m always interested to see how different authors portray their view of the world after a major disaster. I think we as a society have an obsession with end of the world scenarios, and I am particularly interested in the aftermath of those events, rather than what leads up to them. In The List, Patricia Forde explores a society trying to rebuild in the aftermath of a colossal natural disaster. This book is a great addition to the growing narrative of dystopian YA/middle grade novels.

Letta lives in Ark, a city that has been re-built after a natural disaster wiped out much of society many years ago. Some of the older citizens remember the way the world used to be, but many of them have been born and raised in Ark. To ensure the survival of humans, Ark citizens are only allowed to speak List, a language consisting of 500 approved words. Except for the Wordsmith, Benjamin, who is entrusted with the task of documenting and saving words beyond the list, and Letta, who is his apprentice. When Benjamin disappears and Letta becomes the Wordsmith, she starts to discover things about Ark and its leader that make her wonder if this society is actually the utopia it is meant to be. She must decide which is more dangerous: language or the lack of it.

I loved this book! The description immediately brought to mind The Giver, and I’ve since seen it compared to that book several times. The premise is the same: a homogenous culture with a select person who knows the truth. As in any dystopian novel, the government wields extreme power to control and establish a new world. The List uses words and language as that power. It very much reminded me of parenting. We teach our children certain words and try to keep them from others. It is a form of ultimate control. Along the way, outside influences introduce those words whether we like it or not. There are always rebels out there. I will say that the device used at the end of the novel to exert total control is a little convenient, but it didn’t detract from the overall story.

“The here and now is only the smallest part of who we are. Each of us is all that we have been, all our stories, all that we could be.”

Words are so basic that it is easy for us to take them for granted. We teach our kids to describe feelings, emotions, surroundings. We give names to the most subtle of emotions. What would it be like if we were forbidden from using those words? Would it dull the senses, or sharpen frustration? Forde shows us what might happen if language became a contaminant, rather than something to be celebrated. This novel is so relevant today, and I think it’s a great way to introduce some important ideas to kids, in an incredibly entertaining way!

This is classified as a middle grade novel, but I think it fits pretty neatly into the YA category. It’s certainly meant for at least ages 10 and up, and while it’s not as complex as some other dystopian YA novels such as The Hunger Games

, I do think kids all the way through high school would really enjoy this. The storyline of purposefully eliminating language is also a great way to introduce some thoughtful discussions with older kids.