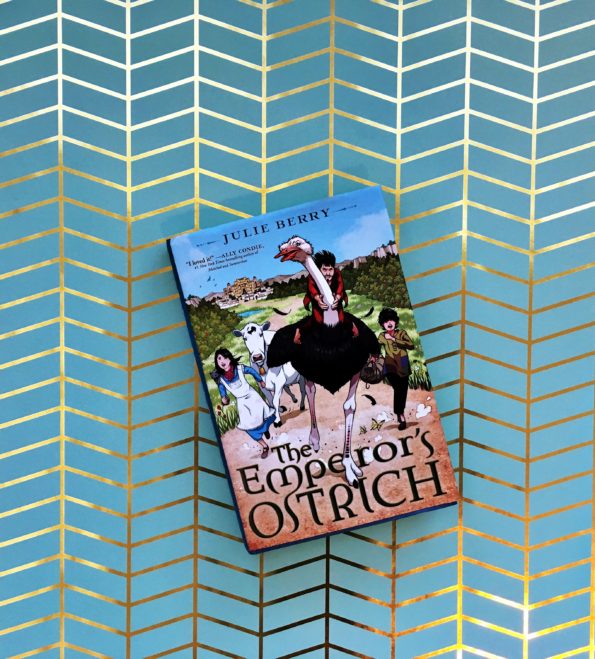 Texas Girl Reads received a copy of this book from the Kid Lit Exchange Network in exchange for an honest review. All opinions are my own.

Know this, my girl: the things you’re doing now, at this marvelous age in your life, aren’t going to waste. All your reliable, responsible choices are building a brain, a heart, and a pair of hands ready to tackle anything life sends your way.

I love fantasy books, and I’m always on the lookout for good middle grade books in that category. (Why aren’t there more?) When I heard about Julie Berry’s The Emperor’s Ostrich

, I couldn’t wait to get my hands on it, as it looked like a funny, adventurous fantasy for the younger crowd. While I do think middle graders will enjoy this, I was hoping for a bit more.

In the empire of Camellion, a 21-year-old emperor reigns supreme. He is spoiled and bratty, and even has an official person who brings him warm milk every night. One night, he is kidnapped from his bed, flung onto an ostrich, and disappears. In the same empire, a young dairymaid named Begonia sets out to find her missing cow, Alfalfa. Along the way, Begonia crosses paths with the emperor (although she does not know he is the emperor), and a light dose of magic helps both along their paths, one finding a cow, the other finding himself.

There are definitely a lot of positive things about The Emperor’s Ostrich. Begonia is a wonderfully strong and independent female character, something I am always a fan of, and of which there still aren’t enough. She questions why major responsibilities always seem to fall to her, but she doesn’t complain. Begonia gets the job done, and the story really stresses that it’s ok, and a desired character trait, to be hardworking and responsible, and that not all girls have to want hair bows and dolls. She is certainly a character to look up to. The book also has some truly funny moments in it, mostly through the character Key, a boy who becomes friends with Begonia. Berry also does a nice job of showing how money doesn’t equal happiness. The emperor has everything except friends, and that turns out to be his weakness.

The problems I had with the story were that the plot was a bit convoluted at times and I wanted a bit more, well, magic, in this magical tale. There were a few spots in the story that jumped around a bit, and I would have liked smoother transitions. And much of the magic was only hinted at. One of the major magical elements in the book, two spirits guiding the story, weren’t a big enough part of the story at the beginning, in my opinion. I would have liked a little more about them.

That being said, I do think younger middle graders who enjoy a more gentle story, with a hint of magic thrown in, will really enjoy this. Fans of The Girl Who Drank the Moon

will surely love this one too, and it’s a bit more accessible for younger readers.

Julie Berry has a blog, and in THIS post, she talks about how the idea for this novel came about. It happened as she was teaching a writing class for kids, so you might find it interesting. I did!