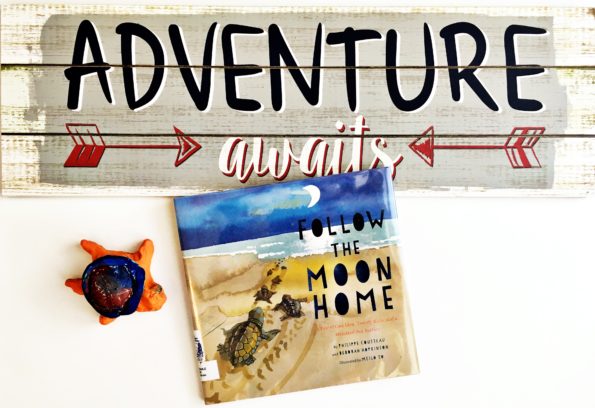 Follow the Moon Home: A Tale of One Idea, Twenty Kids, and a Hundred Sea Turtles

written by Philippe Cousteau and Deborah Hopkinson, illustrated by Meilo So

Bluebonnet Author Site (with author and illustrator interviews, kid-friendly information about the environment, and awesome activities for how kids can make a difference in their own communities)

I love true stories made into interesting books for children, and Follow the Moon Home: A Tale of One Idea, Twenty Kids, and a Hundred Sea Turtles

is a fantastic one. Philippe Cousteau (grandson of Jacques Cousteau) and Deborah Hopkinson took inspiration from the true story of a South Carolina fifth-grade class. In 1988, the fifth-grade class of Ninety-Six Elementary School petitioned the governor to make the Loggerhead Sea Turtle the official state reptile. With a ton of persistence, and the unique ability of children to never give up, the governor passed the bill. This inspired Cousteau to create a story about a little girl, Vivienne, and her quest to save the baby loggerhead turtles in South Carolina. She and her class use what they have learned in class about problem solving to find a solution to the problem of baby turtles heading away from the ocean after hatching, instead of towards it.

If books have the capability, at minimum, to inspire people to think about the world in a different way, this book will inspire the most reluctant of kids to go out and DO something about the world. Cousteau and Hopkinson, along with the beautiful illustrations by Meilo So, show how any problem, no matter how big, can be solved if you take it one step at a time. The world is a big place, and the problems in the world can seem enormous to the most fearless of us, much less children. This book shows that even a group of kids with minimal resources can solve a problem and save an entire species of reptile.

Cousteau is not only an environmental advocate, he is a huge proponent for influencing children to become advocates as well. I have to say that I completely agree with him. It is much easier to impact a child and teach them something that they will hopefully carry with them forever than it is to convince a busy adult that they have time to solve another problem. (Real life story: For years I put off buying reusable grocery bags. I would either forget, or think, “next time,” or whatever other silly excuse I had that day. My oldest son, who was about 6 at the time, learned how negatively plastic bags affect sea turtles as part of the children’s program at the New England Aquarium. Even though we live in a landlocked part of Texas, he was adamant that we not use plastic bags for groceries anymore. He made me realize how simple that one act really is, and we now use reusable bags for our grocery trips. He even reminds me if I forget to bring them in.)

Kids have the power to make both small and huge changes in the world, and it is books like Follow the Moon Home: A Tale of One Idea, Twenty Kids, and a Hundred Sea Turtles

that make them realize how easy it really is to make a difference.

The Great Pet Escape (Pets on the Loose!)

written and illustrated by Victoria Jamieson

Bluebonnet Author Site (with author interviews, pet information, how to create your own graphic novel, discussion questions, and a ton of fun things for kids to do)

I have never been a reader of graphic novels or comic books (outside of Archie when I was a kid), but having two kids growing up in an age where these novels are becoming more and more relevant, I’m learning to embrace them quickly! (Let me sidenote that by saying that I have NO problem with graphic novels. I just didn’t read a lot of them growing up, and I’m learning that they are a bit different from traditional comics.) The Great Pet Escape (Pets on the Loose!)

The Great Pet Escape begins with a fantastically sassy hamster named George Washington (GW for short). He is the second grade class pet and he wants to break out of Daisy P. Flugelhorn Elementary School. When he finally escapes from his jail/cage, he goes to the other classrooms looking for his friends. When he discovers that they actually LIKE being class pets, he feels betrayed. They eventually agree to go with him, but a dictator-ish mouse named Harriet gets in the way. Mayhem ensues.

This book is really cute, but not in an insipid way. There are plenty of jokes in there that adults will also find amusing if they’re reading it out loud. Both of my kids loved it and have re-read it multiple times. The illustrations are wonderful, each pet has a distinctive personality, and if you enjoy reading to your kids, this is a fun one for that!

Jamieson clearly knows what she’s doing, and I’m glad that her books are opening my eyes to how great graphic novels can be. My kids, especially my 8-year-old, love them, and now I do too!

The Girl Who Drank the Moon

Bluebonnet Author Site (with author interviews, fun book-related projects to help kids further understand the book’s themes, and many resources about things like the moon, volcanoes, and dragons)

The Girl Who Drank the Moon

is my third Texas Bluebonnet Award nominee to read. Kelly Barnhill writes fantasy books for middle graders, a category that can be difficult to find that age group. She has done it again here, and it’s easy to see why this book was chosen to be a BA nominee this year. (It has also already won the Newbery Medal.)

Each year, the Protectorate offers up their youngest child (always a baby) to the witch who lives in the woods. They march the baby to a circle of trees and leave it there in the hopes that the sacrifice will keep the witch away from their village. What the villagers don’t know is that the witch, Xan, protects the babies, feeding them starlight and finding them new homes. One year, she accidentally feeds a baby moonlight. As a result, the baby becomes enmagicked, and she decides to raise the baby, named Luna, herself. At the same time, a young boy in the Protectorate decides to go on a witch hunt in order to free his village of this costly sacrifice.

I will preface this by saying that this wasn’t my cup of tea (or mug of hot chocolate, since I don’t drink tea), but it is a great book. I think it’s an excellent segue for middle graders into fantasy novels. If I was between 8 and 12, I would absolutely fall in love with this book. (And since I can’t help but think this way, it would make a beautiful, fun movie as well!)

The Girl Who Drank the Moon is a solid, middle grade fantasy novel, and I think most kids will really enjoy it. Depending on your young reader’s reading level, I would say this is good from age 9 all the way through high school. Younger readers will enjoy the fantasy, magic, and seeing how small kids can accomplish big things. Older readers will be able to get into the underlying themes and more subtle details of the novel, particularly the ideas of what makes a family and just how powerful the bond between mother and child can be.

Barnhill has done a fantastic job of filling in the fantasy genre for younger readers, and I think this is a strong contender for the winner of the Texas Bluebonnet Award.

Ada’s Violin: The Story of the Recycled Orchestra of Paraguay

Bluebonnet Author Site (with author and illustrator interviews, recycled orchestra activities, and links to videos of the Recycled Orchestra’s concerts)

“Ada Rios grew up in a town made of trash.”

If that first line doesn’t get your or your kids’ attention, I don’t know what will.

There is a group of kids in Paraguay that live in, for, and because of trash. Daily life revolves around picking useful and saleable things from the heaps of trash dumped near their homes every day. Although the kids do attend school, they are usually told that the best they can hope for is to also become trash collectors. A few of these kids, and one amazing music teacher, decided that there had to be something else, and that art, even in a literal pile of garbage, was worth creating and maintaining. With the help of their families and teacher, the kids collected items from the garbage and made instruments. Real instruments that they have crafted and perfected to play each note perfectly on key. Even though finding the time and energy to not just make the instruments but then learn to play them, and then learn to play big musical pieces, was difficult, they persisted. Now the Recycled Orchestra tours the world and has even played with Metallica and Stevie Wonder. The money the Recycled Orchestra earns goes back to help pull their families out of slum living, and there are plans to help other kids living in landfills around the world.

The illustrations in Ada’s Violin are collage-style, to mimic the theme of making something from pieces of other things, and they really are beautiful.

This story is beyond inspiring. The kids in Cateura, Paraguay, made something from next to nothing, and they never gave up, despite having every reason to. Creating and making music gave them a sense of importance, and a sense of belonging in a world that hadn’t been very kind to them. It’s a beautiful narrative and a beautiful book. This is such an important story, and I hope more people learn about the Recycled Orchestra because of it. If you can’t get to the book, or want to know more about them RIGHT NOW, go check out all the videos of the Recycled Orchestra playing in concert. They are extremely talented, and their homemade instruments are amazing!

Bluebonnet Author Site (with an author interview, lots of cool information, and fun projects for kids related to the book)

This Texas Bluebonnet Award nominee is the first book I read from the list and it is so good! Do you know who invented the Super Soaker? I didn’t either, until I read this book. Chris Barton tells the story of a kid who wanted to be an inventor and actually grew up to be one, despite living through some difficulties that would get the best of us, including the racially-charged 1960s. His claim to fame may be the Super Soaker (and my 10-year-old self will always think that’s his coolest invention), but Lonnie Johnson also worked for NASA’s Jet Propulsion Laboratory and the United States Air Force. After reading this book (which has great illustrations as well), I couldn’t believe I had never heard of Johnson, and I immediately wanted to know more. (And as a bonus, both of my kids were riveted by the entire book, couldn’t believe the things he’d invented, and immediately started talking about what they wanted to invent.) I think any kid, or adult, would enjoy this book, and especially kids who enjoy building with Legos or like to invent things.