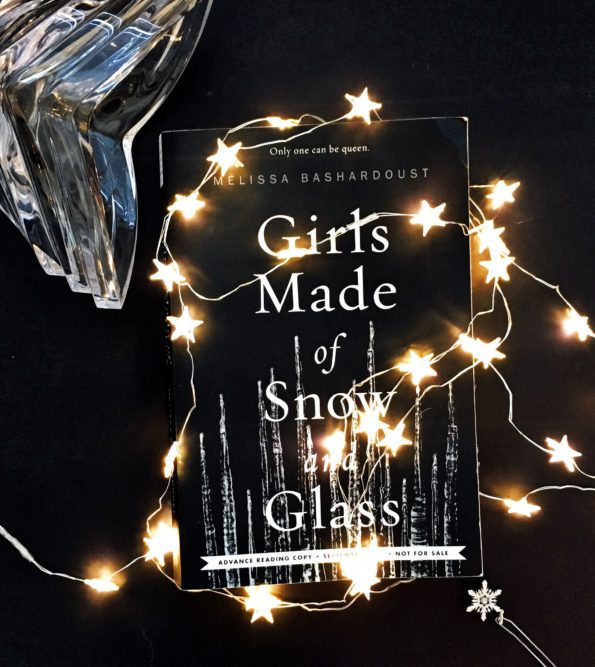 Girls Made of Snow and Glass

Thank you to Texas Reader Girl for loaning me her Advance Reading Copy of Girls Made of Snow and Glass!

Heartless. But that’s what I am, she thought. That’s what I’ll always be.

Let me start off by saying that I am an unabashed fan of fairy tales. I watched The Little Mermaid so many times as a kid that I wore out the VHS tape (Oh, yes. I had it on VHS. Twice.) and we had to wait until it came out of that precious Disney vault to replace it. I love fluffy fairy tales and the Brothers Grimm. All are fair game, including re-tellings. I really enjoy fantasy fairy tale re-tellings. (Is that a thing? Let’s make it a thing.) Girls Made of Snow and Glass

by Melissa Bashardoust is a re-telling of Snow White, and this is a perfect fit for that long-winded genre.

Mina, whose glass heart has never beat and who is convinced she is unable to love anyone, moves from the southern kingdom to Whitespring Castle in the north with her magician father at the age of sixteen. She hatches a plan to make the king fall in love with and marry her so that she can experience true love for the first time. Lynet, the king’s daughter, is the spitting image of her dead mother, and for good reason: the magician created her out of snow for the king after his wife died. Mina, the only mother Lynet has ever known, has been a strong, loving role model all of Lynet’s life. When the king makes the decision to pass the crown of the southern kingdom to Lynet, instead of to Mina as promised, Mina’s feelings about her step-daughter begin to change, and Lynet must decide what is more important: wearing the crown or keeping her relationship with Mina.

I loved this book! It was an excellent re-telling of Snow White, as well as a good story that was easy and fun to disappear into for awhile. Parts of it were a bit clunky and a little too simply written, but it was the perfect tone for a YA novel. The plot was well-developed, but so were the characters. I kept trying to guess what Mina and Lynet would do next because I felt like I knew them so well. The descriptions of the two kingdoms (Whitespring in the north and the southern kingdom) were beautiful, and I wish I could visit them both. I absolutely loved how Bashardoust took details from the original story (like the magic mirror) and twisted them to create a whole new perspective. The inner struggles of both women were well thought out, and it all leads up to a thrilling ending. If you enjoy fantasy, fairy tales, or stories about female relationships, this is THE book for you!

Girls Made of Snow and Glass

EXTRA!
My one caveat is that this book is being marketed as a feminist fairy tale, and I didn’t find the story to be very feminist. The female characters were definitely strong, and represented roles not usually portrayed in fairy tales, including the palace surgeon being a woman. But all of the women were still reliant upon men to be successful. This didn’t alter my enjoyment of the story at all, I’m just not sure it should be marketed as full-on feminist.