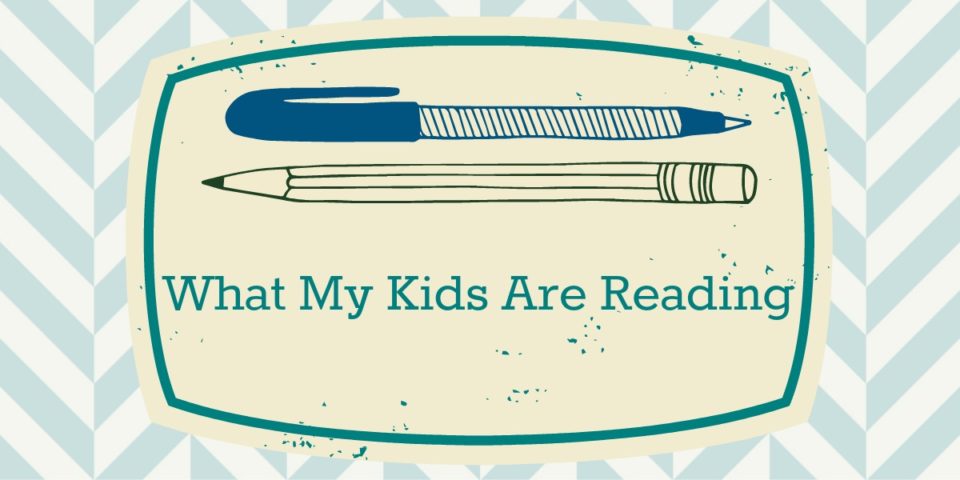 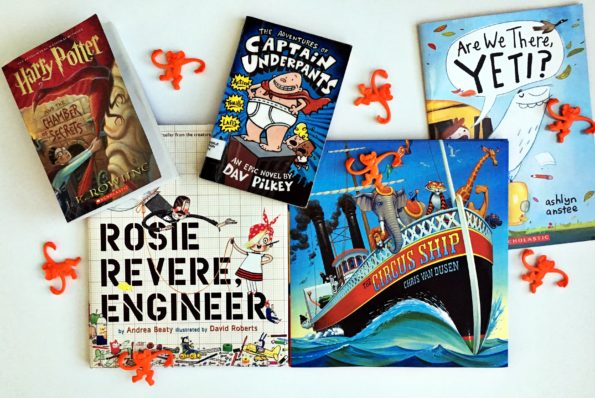 The list is a little longer this week! We’ve had lots more reading time because of the summer break, so we’re coming across a lot more favorites right now!

The 8-Year-Old
Harry Potter And The Chamber Of Secrets

From the publisher: “The Dursleys were so mean that hideous that summer that all Harry Potter wanted was to get back to the Hogwarts School for Witchcraft and Wizardry. But just as he’s packing his bags, Harry receives a warning from a strange, impish creature named Dobby who says that if Harry Potter returns to Hogwarts, disaster will strike. And strike it does. For in Harry’s second year at Hogwarts, fresh torments and horrors arise, including an outrageously stuck-up new professor, Gilderoy Lockheart, a spirit named Moaning Myrtle who haunts the girls’ bathroom, and the unwanted attentions of Ron Weasley’s younger sister, Ginny. But each of these seem minor annoyances when the real trouble begins, and someone–or something–starts turning Hogwarts students to stone. Could it be Draco Malfoy, a more poisonous rival than ever? Could it possibly be Hagrid, whose mysterious past is finally told? Or could it be the one everyone at Hogwarts most suspects…Harry Potter himself?”

We finished Harry Potter and the Sorcerer’s Stone

and have moved on to the second book in the Harry Potter series. As was expected, my 8-year-old loves it, and we are reading it together at night and he reads it to himself during the day. I love re-reading it this way, and my son is very forgiving of my attempts to re-create all the British accents. (Hagrid’s deep, Scottish accent is particularly difficult, but it’s not stopping me from trying!)

The 6-Year-Old
Are We There, Yeti?

From the publisher: “When Bigfoot is driving the bus, a field trip can feel legendarily long…but the best surprise of all is yeti to come! When Yeti, the school bus driver, takes the class on a surprise trip, everyone wants to know: “Are we there, Yeti?” And when they finally arrive, a new adventure is in store!”

This is a really cute book, and definitely too easy for my 6-year-old. But I’m ok with any book he’s excited about reading, and it’s a funny story using the old, “Are we there, yet” storyline. It’s a quick, entertaining read, and perfect for a short break on hot summer afternoons!

What We’re Reading Together
The Adventures of Captain Underpants

From the publisher: “George and Harold have created the greatest superhero in the history of their elementary school–and now they’re going to bring him to life! Meet Captain Underpants! His true identity is so secret, even HE doesn’t know who he is!”

I will admit that I have avoided this book because . . . well, I have two boys. There’s already plenty of underwear talk to go around. But I found it at the library and got it because they wanted to see the movie, and I have deep, deep feelings about reading the book before seeing the movie. Even for movies about underwear superheroes. And I have to now admit that I wish I had read this to them sooner! This book is funny, it’s smart(ish) humor for kids, and it really embraces all of the best things about being a kid–best friends, clubhouses, banding together against evil adults, funny underpants. I highly recommend this book! (And the movie. It was pretty much non-stop laughing the whole time!)

From the publisher: “When a circus ship runs aground off the coast of Maine, the poor animals are left on their own to swim the chilly waters. Staggering onto a nearby island, they soon win over the wary townspeople with their kind, courageous ways. So well do the critters blend in that when the greedy circus owner returns to claim them, villagers of all species conspire to outsmart the bloated blowhard.”

I discovered this book through the Read Aloud Revival podcast, and I’m so glad I did! It’s a beautifully illustrated, well-told story of a group of circus animals that escape from their evil ringmaster. My kids loved the story, and they really loved finding all the animals in the scene where they hide from the ringmaster. Another winning picture book!

From the publisher: “Rosie may seem quiet during the day, but at night she’s a brilliant inventor of gizmos and gadgets who dreams of becoming a great engineer. When her great-great-aunt Rose (Rosie the Riveter) comes for a visit and mentions her one unfinished goal–to fly–Rosie sets to work building a contraption to make her aunt’s dream come true. But when her contraption doesn’t fly but rather hovers for a moment and then crashes, Rosie deems the invention a failure. On the contrary, Aunt Rose insists that Rosie’s contraption was a raging success. You can only truly fail, she explains, if you quit.”

We all love Andrea Beaty and David Roberts’ books. This was the only one we didn’t have, and I kind of wish I’d bought it first! I could tell that my kids were affected when Rosie was laughed at, but didn’t give up anyway, and any kid would love seeing her wild inventions! I cannot recommend this book enough, and I’m pretty sure we’ll be getting all the corresponding workbooks for some extra fun.