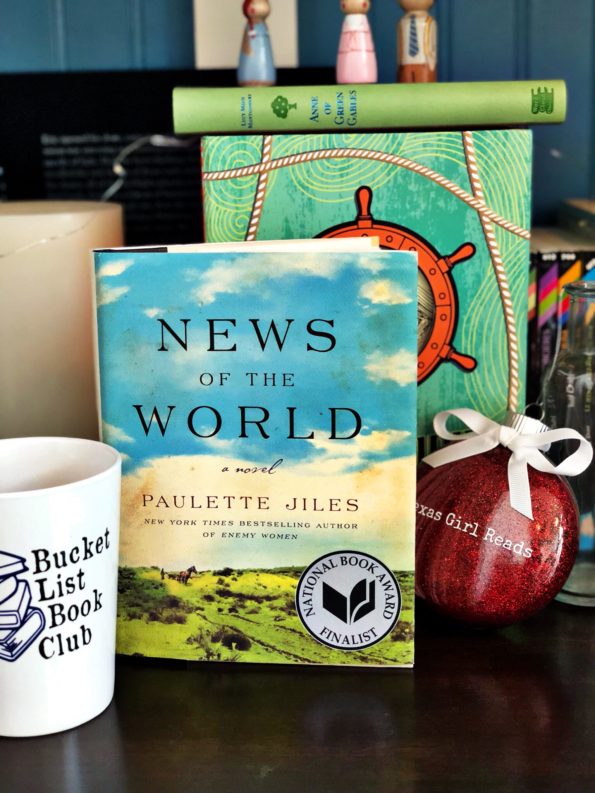 News of the World

And here he was in his mild and mindless way still roaming, still reading out the news of the world in the hope that it would do some good, but in the end he must carry a weapon in his belt and he had a child to protect and no printed story or tale would alter that.

I have a confession to make. Even though I am from Texas and have always lived here (except for a semester in college when I lived in Washington, D.C.), I don’t read a lot of Texas books. I don’t really seek out Texas authors, and I tend to shy away from books about Texas. Why that is I’m not sure, except that I have my own opinions about Texas, and perhaps I don’t want them messed with. But when several people, including my mom and Anne Bogel, recommended News of the World

by Paulette Jiles, I decided to make it my Bucket List Book Club pick for August and “force” myself to read it. Guys, this is a book about Texas written by a transplant Texan who lives about an hour away from me. And y’all, I’m so glad I did.

News of the World takes place just after the Civil War, when there was still a ton of unrest in Texas, no one trusted each other, and the relationship between Texans and Indian tribes was contentious at best. Captain Jefferson Kyle Kidd, a military veteran, travels around Texas reading news stories from international newspapers to crowds of people, who all pay to listen. They lose themselves in the news and tragedies of far away countries that don’t quite seem real in order to forget their own problems for a little while. At one of his stops, he is offered $50 to return a girl, Johanna, who was kidnapped by the Kiowa tribe to her remaining family in San Antonio. For four years she has been living with the Kiowas, and she no longer seems to remember her family, how to speak English, or where she came from. The bulk of the book is about their journey together and how they each grow and change.

First of all, I just want to say that you MUST read this book, if only to read it before the Tom Hanks movie version comes out. It is so well written and well researched. It takes place during a very interesting and confusing time in Texas history, but I think a lot of parallels can be drawn to today’s history as well. (People losing themselves in news from other countries to escape thinking about our own news? Yup.) The book strikes a nice balance between a quiet story and intrigue. Yes, it’s a quiet book, but I absolutely wanted to know what happened after every chapter. Along those lines, I think this book would be best read in one or two sittings. I took too many breaks, and I wish I had just sat down and read it straight through. It’s a long journey, but a short book, and really lends itself to a lazy day spent in a comfy chair.

News of the World

is such a good story and such a quick read, I really think everyone should give it a try. It’s amazing to see Captain Kidd’s journey from not wanting to take Johanna at all to becoming attached to her and fully invested in her happiness and wellbeing. Johanna’s story is heartbreaking (read the author’s note at the end), but is tempered by the story of a tough old Texan soldier turning into a softie. Sort of. It also has one of the best, most beautiful final chapters of a book I’ve ever read.

There are no quotation marks used in this book! The absence of quotes was a little jarring at first, but I ended up really appreciating it. Whenever I see quotes on a page, my eye is automatically and involuntarily drawn to them, and I often have to go back and re-read what came first. Without quotes, I really paid attention to each sentence as it came, instead of looking ahead to the dialogue.