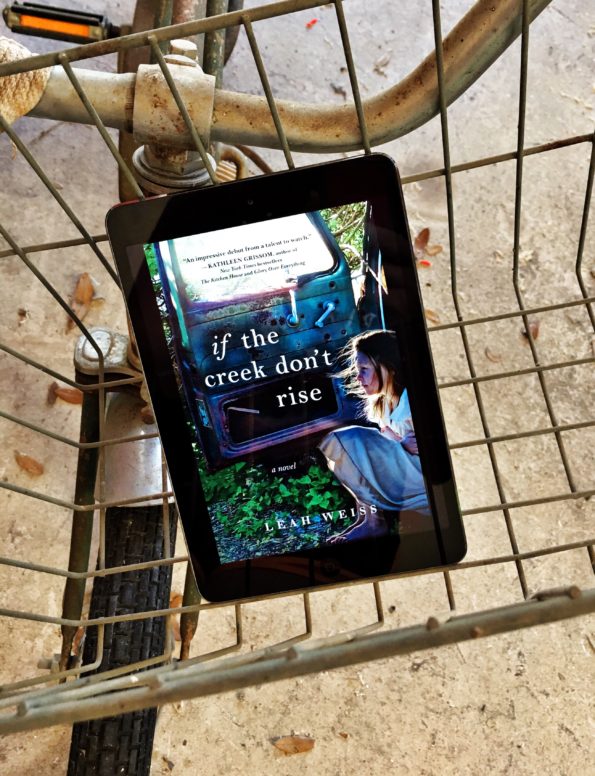 If the Creek Don’t Rise

Thanks to Netgalley and Sourcebooks Landmark for providing me with a digital galley of this book – all opinions are my own.

“I thought she was jealous cause I was happy. I thought I was smart and loved a bad man turned good. I’ve been on a losing streak a long time.”

Every once in awhile, a book comes along that completely knocks me off my feet and leaves me thinking about it for days and weeks and months after. Leah Weiss’s debut novel, If the Creek Don’t Rise

, is one of those, and I cannot give enough praise to her writing. This is an extraordinary first novel about the south, family, and survival.

“You knock them fake stars outta your blind eyes, Sadie Blue, or you gonna lay with the devil and live in hell. When that happens, I can’t help you.”

Sadie Blue, pregnant with her first child, has been married to Roy Tupkin for less than a month, but it’s enough time for her to realize she never should have even looked at him. But in Appalachia, survival rules, and no one has time to save Sadie when they’re all trying to save themselves. When a new schoolteacher moves to Baines Creek, the remote town where this cast of characters lives, some people begin to see things a little differently, and Sadie might be able to find a way to save herself.

This is not a wimpy book. From the first sentence, we are thrust into the middle of this world, and it is not idyllic. There is poverty, there is abuse, there are families struggling just to survive another day. This book is the very definition of warts and all, and Weiss’s writing is so strong that I felt as though I were in the characters’ homes watching what was happening to them. The story is written so beautifully and honestly, and while it does cover some tough subjects, there is hope, and there are absolutely characters to root for.

Weiss uses multiple points of view throughout the novel, as well as writing in a particular Southern dialect. That can sometimes fall flat in novels, but she did it in such a way that it really helped to distinguish the characters, and I could hear each and every one of them as individuals in my head. Some characters, such as preacher Eli Perkins, are well educated and speak “properly,” and that is reflected in the text. It really added a lot to the story.

If the Creek Don’t Rise is heartbreaking, and parts of it are difficult to read, but it is also a love letter of sorts to the people in that part of the country. Appalachia is often the butt of jokes in the media (I’m sure you can think of a movie or show that’s used it as a joke, or perhaps a derogatory word comes to mind.) and not taken seriously as a culture. While there are real problems in that region, Weiss depicts a group of people who are survivors. They may not be the survivors we see in movies who end up with nice houses and lovely spouses, but they are surviving abuse, poverty, lack of education, and being stuck in a remote area. Their way of life is just as real as anyone else’s. The characters in this novel, and I suspect in real life, may not be worldly, but they are tough. This is Southern fiction at its best, and I certainly hope Ms. Weiss has more in store for all of us.

If the Creek Don’t Rise