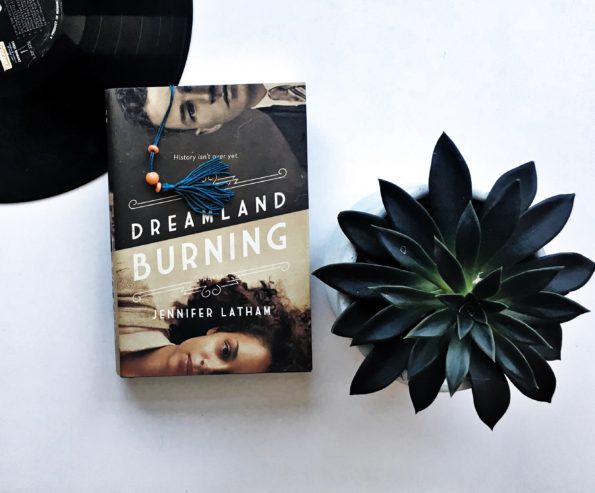 “I understand now that history only moves forward in a straight line when we learn from it. Otherwise it loops past the same mistakes over and over again.”

is marketed as YA, but if I hadn’t known that I would have assumed it was historical fiction for adults. It is a re-telling of the Tulsa race riots of 1921 (an event I’m ashamed to say I didn’t really know about), but at its heart it is a story about two teenagers finding out who they really are, and how they try to make sense of injustice in the world.

The story is told in alternating chapters between present-day 17-year-old Rowan Chase and 17-year-old Will Tillman in 1921. When Rowan discovers a skeleton under the floorboards of her family’s guest house, she takes matters into her own hands to find out who the skeleton was and how he or she died. What she discovers makes her question who she is and how far race relations have really come in the last hundred years. Will, a teenager in racially-divided Tulsa in 1921, finds himself in the middle of a race war that he doesn’t necessarily want to be in. He must decide not only how to react to a contentious situation, but how his actions will influence the kind of person he is now and in the future.

I loved this book. Couldn’t put it down, brought it with me everywhere until I finished it, loved it. Jennifer Latham researched the race riots so well and crafted a compelling story around them that I think anyone would consider a page-turner. The main characters were well-written and I felt like I really knew them. The story itself questioned race relations of the past and present, and made important observations about how far we really haven’t come without blatantly seeming like an author’s agenda. This is definitely fiction, but there’s a lesson to be learned as well. I was fascinated by the events leading up to the race riots and how the fallout from that is still seen in present day. We call it history, but not everything remains in the past.

I will say that towards the end, the family lines and connections got a bit mixed up for me, but that also could have been because I stayed up way too late finishing it. I also wanted to know more about the dynamic between Will and his community. His mom was an Osage Native American, and surely that would have played some kind of role as well. Maybe it’s from having read Killers of the Flower Moon

recently, but I did wonder why that aspect was overlooked.

Overall, this is an interesting, well-written, page-turner of a book that I think covers an important, forgotten part of American history. If you don’t usually read YA, please give this one a try. It is such a good story, and really shows how much we can learn from history, and how important it is to never forget the past. As Rowan says, “The dead always have stories to tell. They just need the living to listen.”