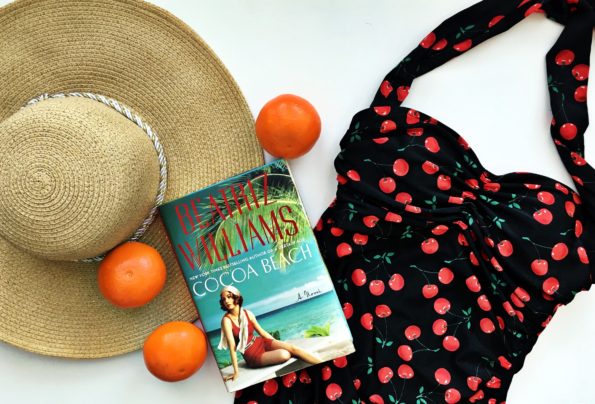 “Because while houses burned down regularly, and people died all the time, I had never imagined that Simon could meet his end like that. You could not extinguish my husband in mere flames. It simply wasn’t possible.”

with the Salt Water Reads book club in July. I had never read any of Beatriz Williams’ books before, and I was really excited to start Cocoa Beach. It’s a little bit historical fiction, a little bit literary fiction, and a lot of mystery. I really enjoyed this one, with a few caveats.

Virginia Fortescue, a WWI ambulance driver, meets a dashing English surgeon on the battlefield in 1917. (Quite literally on the battlefield, surrounded by dead and dying men.) Despite trying as hard as she can to not fall in love with Simon Fitzwilliam, she does, and he seems to fall head over heels in love with her. They marry, and it is only after their marriage that she begins to discover he has a dark past of his own. Fast-forward five years, and Virginia learns that Simon has died in a house fire. They have been separated for the entirety of their marriage, and she and her daughter must go to Florida to settle her dead husbands’ estate. The only problem? Virginia suspects that Simon might not really be dead.

Cocoa Beach is a good combination of mystery and light literary fiction. Despite parts of the story being overwritten, Williams gets the tone just right. It took me a little longer to get into the book, but I flew through the second half because I wanted to know what was going on! She drops little hints throughout the novel about the bigger mystery at hand (Is Simon dead? Why are his brother and sister acting a bit odd around Virginia?), and that really kept me hooked into the story. I also can’t speak for the author, but I suspect she might be a fan of the fantastic 1944 film Gaslight. If you like that movie, you’ll find a lot to like about this novel. Virginia knows herself and is a strong character, but Simon’s brother and sister cause her to doubt herself to the point of devastation.

The big problem I have with this book is that it is part of a (loose) trilogy, and I didn’t know that. It is being marketed as a stand-alone novel, but certain parts of the book, and the ending, are confusing and don’t make sense if you haven’t read the other two books, which I haven’t. The other two are The Wicked City

and A Certain Age

, and apparently they explain a lot more about some of the characters in Cocoa Beach, and the ending of Cocoa Beach is entirely based on those books. I love when authors create stories for other characters in their books, but if a book is marketed as a stand-alone, then it really does need to stand on its own, and not require two other books as backstory just to understand the ending.

Beatriz Williams is a strong writer, and I have put her other books on my TBR list because of that. She is a great storyteller. I just wish that I had known to read those other two books before reading this one, and I would suggest you read those before Cocoa Beach as well. It will make Cocoa Beach much more enjoyable. That being said, I really do like her writing style, and I am looking forward to reading all of her other books.

Technically this is categorized as historical fiction, but the story really deals more with character relationships than the historical setting. The time in history really serves more as a backdrop than a major plot point. If you’re trying to read more historical fiction and it’s not a category you usually enjoy, I think this would be the perfect book to add to your list.