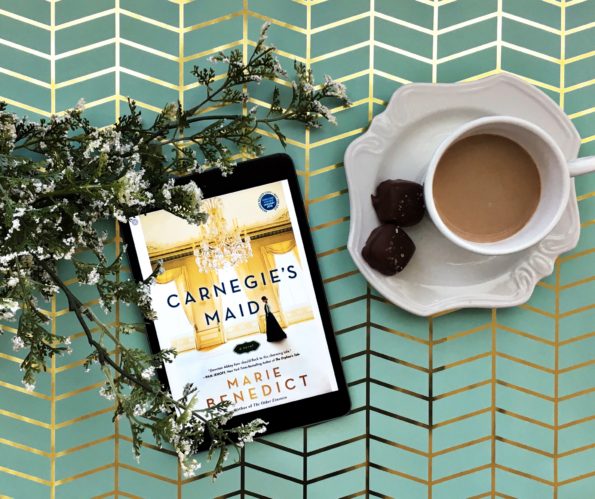 Thank you to Netgalley and Sourcebooks for the review copy of this book! All opinions are my own!

All around me, I heard cries of reunion as my fellow passengers fell into the arms of their waiting relatives. But I walked on. No one was waiting for me.

Marie Benedict has quickly become one of my favorite authors over the last year. Which is great, but also a problem because she’s only written two books and I want more! I read her first book, The Other Einstein

, in June as part of the Big Library Read. It was a fictional re-telling of Albert Einstein’s first wife, Mileva Maric, and the impact she had on his work and life. (And the credit she never received.) I loved it (You can check out my review of that book HERE.), so I was very excited when I found out her second book, Carnegie’s Maid

, would be published in January. Readers, it did not disappoint. I loved it just as much as her first book, and I definitely recommend this historical fiction novel.

Clara Kelley has come to America on a ship from Ireland to make her way in the land of opportunity-her family needs money and jobs are scarce in 1860s Ireland. The boat ride over is rough-sickness, not enough food, not enough space, and many people didn’t survive the trip. When she hears someone calling her name (a very common Irish name) to get on a carriage to Pittsburg, Clara jumps at the chance. The only problem is that she isn’t the Clara Kelley the driver was waiting for-that Clara most likely never made it all the way to America. In Pittsburgh, she becomes a lady’s maid to Andrew Carnegie’s mother, a notoriously difficult woman. As she gets to know the family more, and very much fakes it until she makes it in an unknown environment, she develops a close relationship with Andrew. He teaches her about business, and she helps him with his business. The Civil War is in the background and while not a focus, it provides some interesting side stories. But when her identity is revealed, she has to make a decision whether to stay or go, and to fight for what is right for her own life.

Clara is a completely fictional character, but represents the countless number of immigrants who could have influenced the upper classes as America was still being formed. Benedict was inspired to begin research for this novel when she came across Carnegie’s letter to himself pledging to use his wealth to help less privileged citizens gain success through knowledge. She imagined why he would have written that, and Clara was born. As with Einstein, this book made me want to research the history behind it. This is a particularly interesting story because Carnegie, one of the wealthiest people in American history, came to American as a poor Scottish immigrant. He had drive, but he also had help along the way, and the dichotomy between him and Clara is extremely interesting. He recognizes that Clara is in the same position he was when he first came to American, and he wants to help her, but he also wants to be sure to maintain his status.

Clara might be a fictional character, but strong women in history are not, and there are so many stories that we will never know because of men taking the credit. Carnegie’s Maid

is Benedict’s excellent attempt at giving a voice to some of those strong female influencers throughout history, especially during a time when the infrastructure of the United States was newly forming. And to be very plain, it was just a really good story that sucked me in within the first few chapters. Benedict writes fully formed, interesting characters, and I truly hope she continues writing these books and giving a voice to women in history, fictional or not.