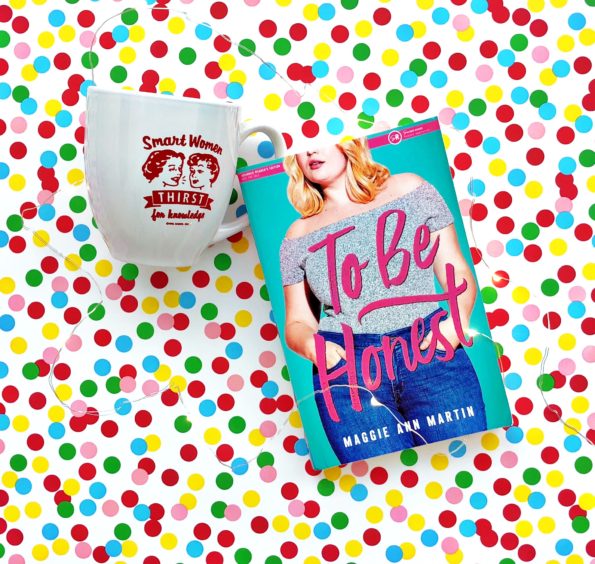 Thank you to the Kid Lit Exchange network for the review copy of this book! All opinions are my own!

News flash: fat isn’t a bad word, Mom. . . . I have blue eyes. I have blonde hair. I’m fat. Literally nothing about my life is changed because that word is associated with my physical appearance.

Y’all, YA authors have been hitting it out of the park lately with body-positive, non-traditional main characters lately. To Be Honest

by Maggie Ann Martin is no exception. A beautiful, smart, funny, fat main character? Yes, please!!! (“Newsflash: Fat isn’t a bad word.”) At the risk of sounding preachy, I just want to say how important it is that these books exist, and how much I wish they had existed when I was growing up. Books like this aren’t advocating for kids to be unhealthy (an argument I have heard before, or I wouldn’t be mentioning it). They are advocating for kids (mostly girls, because there’s such a huge diet culture aimed directly at females) to love who they are, their size, and what they look like RIGHT NOW. Not later. Not, “once I’ve done such and such.” To love themselves right here and right now. Fat isn’t a bad word, and it’s also not a determining factor in personality, brains, or success. I cannot stress how important this is, and I think everyone, young and old and older, should be reading and embracing these books and themselves. Alright. On to the review.

Savannah (Savvy) is not looking forward to the next year. Her sister and best friend just left for her first year at college, and Savvy is stuck at home with her weight-loss-show contestant mom. In addition to losing an unhealthy amount of weight on the show, she is now obsessed with remaining thin, eating the least amount of food possible, and dragging Savvy into that lifestyle. Meanwhile, Savvy has a new friend/crush in George, the new kid at school. Between her mom’s concerning behavior, her love life, and trying to be a normal teenager in the process, Savvy is juggling quite a bit. The story is about Savvy finding her own happiness amidst insecurities, her mom’s unhappiness, and figuring out who she really is as a person.

This book is wonderful. Wonderful! On the surface it’s a YA romance, but the story goes much deeper than that, in a way that’s easy for younger readers to relate to. I loved seeing the development and breakdown of the mother/daughter relationship (and the not so thinly veiled sendup of The Biggest Loser, an extremely harmful show) and how realistically Martin portrays the slow healing of a damaged maternal relationship. She really stresses the importance of how our kids see us versus how we see ourselves, which rarely matches up. Before the reality show, Savvy saw her mother as strong and beautiful, and all she wants is for her mom to look at herself through that lens. (Something we could all stand to do.) Savvy also love the way she looks. She does not apologize for being a certain size, and she displays only a few normal insecurities that anyone might have.

As for the romance . . . it’s a sweet plot, and Martin handled it perfectly for middle grade and up readers. I love that looks aren’t ignored (there’s no way for looks not to be involved in the beginning of relationships, especially in a teen YA romance novel), but aren’t the main focus, either. It’s about how Savvy and George support each other and how they make each other feel. Being cute is just the YA icing on top.

My only complaint about To Be Honest

is that I wish it was longer! There were some wonderful sub-plots that would have been even better if they’d had a few more pages devoted to them, and Savvy’s relationships with her mom and dad would have benefitted from a few more in-depth scenes. However, this book is perfect as a middle school and teen book and as a body-positive story (more fat girls in lead roles with the focus not being on their weight, please). I would truly recommend it to anyone ages 11 and up. You need it in your life!!

This would be a great companion read with Julie Murphy’s Dumplin’. (Read my review of that HERE.) I don’t often make read-alike comparisons, because that’s too much pressure to place on a book! The writing styles of these two books are different, but they both send the same message of being with who you are, not just how you look. 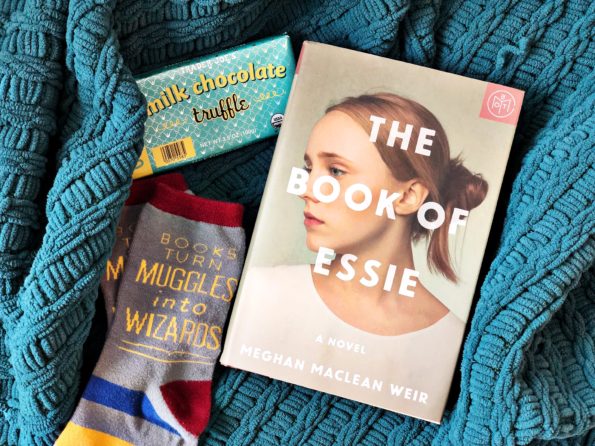 The Book of Essie

As if how you feel about your family ever makes any sense at all. I should know better than most. Because forgiveness is exactly what I gave my own parents years ago.

The Book of Essie

by Meghan Maclean Weir was my Book of the Month selection for June. I almost didn’t choose it, but Annie Jones from The Bookshelf recommended it as a weird, good but not great, and interesting book, especially if you’ve watched reality shows like the Duggars before. (Full disclosure: I absolutely have.) And it was exactly what she said it was: entertaining, very readable, good but not great. This is a good choice for a summer beach read if you want something entertaining or to snuggle under a blanket and read about someone else’s crazy life.

The story is about Esther Ann Hicks, or Essie, and her family. They are super religious, the head of a mega church, and their lives are documented on a reality TV show called Six for Hicks. When Essie’s mom finds out that she’s pregnant, they must decide if, when, and how they’re going to reveal this to the public. While it seems as if Essie’s life is being manipulated out of her control, she’s quietly planning something bigger behind the scenes. With a new friend, Roarke, and a TV show host with her own interesting past, Liberty Bell, Essie plans to discover the truth of her family’s past and reveal her own way to freedom.

If this sounds like 19 Kids and Counting, the reality show about the Duggar family . . . that’s because it’s very clearly taking a lot of elements from that show. And I’m here for it. In my opinion, the first two-thirds of the book was a little slow, but I still wanted to keep reading to find out what happened to Essie’s family and what Essie was planning. The writing isn’t bad, the story just wasn’t as thrilled as I wanted it to be. However. The last 110 pages of the book? They made the entire book worth the read. As in, I kept saying, “Whoa. Whoa!” I don’t want to describe anything in particular so that I won’t ruin the story, but I will say that the story resolves in a very satisfying (but also weird) way.

If you like the dynamics of family reality TV shows or are interested in books centered around cults, I think The Book of Essie

is worth a read. I wish the entire book had been as compelling as the last third, but that last third is a doozy and I flew through it! 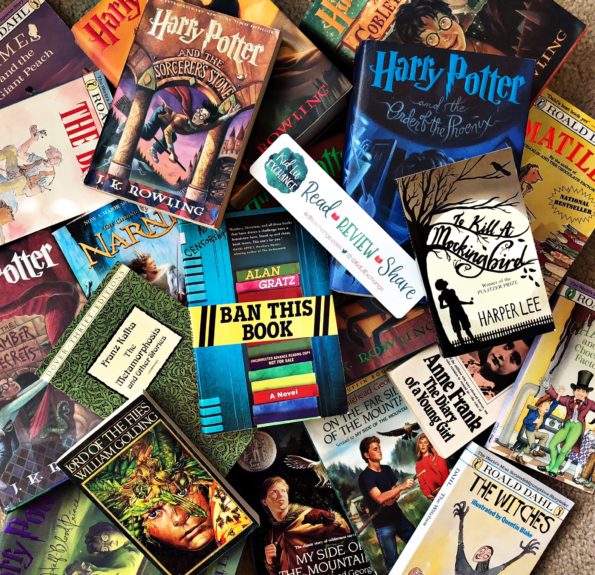 Thank you to the Kid Lit Exchange for the review copy of this book! All opinions are my own!

How do you explain to someone else why a thing matters to you if it doesn’t matter to them? How can you put into words how a book slips inside of you and becomes a part of you so much that your life feels empty without it?

I have very strong feelings about banned books. As in, I don’t understand why anyone would want to ban books. Are there certain books that kids should wait to read until they’re a certain age? Of course! But should those books be banned from libraries just because they may contain some less than pleasant content? Um, NO. Ban This Book

by Alan Gratz (author of Refugee) takes on the subject of banned books from a fourth-grader’s perspective, and shows just how much of a difference one student can make. This is a middle grade book, but I would recommend it to anyone who has a vested interest in keeping books on shelves and wants to be inspired by a fictional fourth grader.

Amy Anne Ollinger loves to read. Her favorite book is the classic From the Mixed-Up Files of Mrs. Basil E. Frankweiler

, and she checks it out from the library as often as she can. When she discovers that the book has been removed from her school library because a parent petitioned to have it banned (for teaching children to lie, steal, and run away from home . . .), Amy knows she can’t just sit back and let more books be taken away. With the help of some good friends, and one unexpected accomplice, she devises a plan to get all the books that are being banned into the hands of students, no matter what it might cost her in the end.

This book is absolutely fantastic! It really illustrates why it’s important for us and our kids to fight against books being banned. Amy is in fourth grade, and while she isn’t old enough to make adult decisions, she is old enough to decide what books to read. (The story does include a part where the parents make it clear that there are some books parents need to decide when to let their kids read, which is completely different from banning them. The Hunger Games is used as an example.) I think it is easy for adults to forget how much kids can accomplish on their own, and how smart they really are. This book very realistically shows what a group of kids can do when a challenge is thrown at them and they want to do the right thing, even if a few parents think it’s wrong.

is inspiring, important, and entertaining. I would honestly recommend it to anyone who’s interested in what banning books in schools actually looks like. If you’re an adult reading it, it won’t take you more than a couple of sittings to finish it, and I think it’s worth it. If you have kids from about 10 and up, and definitely highly recommend this too. It’ll also open up a lot of discussions about why specific books have been banned over the years, and why it’s important for them to stay on the shelves. Be right back, adding all of Alan Gratz’s books to my to be read list!!

I think this book would be entertaining for middle schoolers and advanced elementary school readers. The only reason I suggest age 10 and up is that there is a book about sex mentioned, and if you haven’t discussed that with your kiddo yet, you might want to hold off if you’re not ready for those questions! The book mentioned is It’s Perfectly Normal

Nothing detailed is discussed, but some of what the book about is discussed. Of course, this might also be a gentle way to see if your kids do have any questions about this subject!