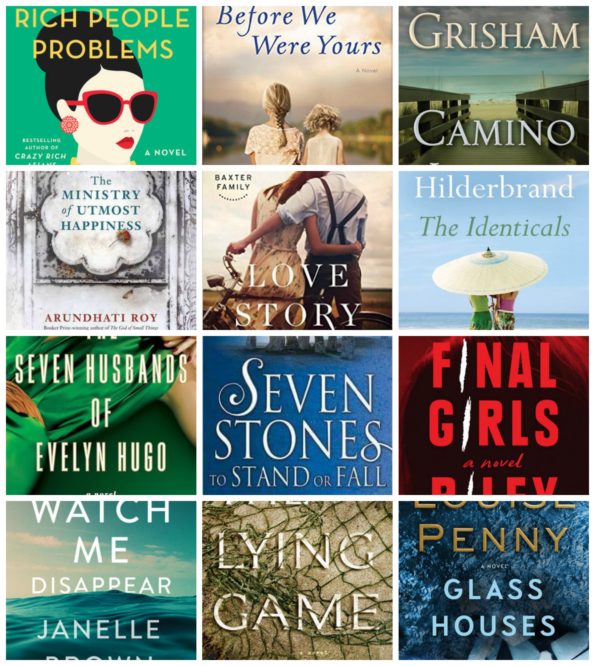 Summer is a great time to get a little extra reading done (although it doesn’t help my to be read pile AT ALL), and this year there are several books that I can’t wait to get my hands on! Here are a few releases that I’m excited about, and a few that I’ve been able to read already!

, is back with an uproarious new novel of a family driven by fortune, an ex-wife driven psychotic with jealousy, a battle royal fought through couture gown sabotage, and the heir to one of Asia’s greatest fortunes locked out of his inheritance.”

I have wanted to read all of Kwan’s novels for awhile, and my plan is to pick a weekend this summer and read all three back to back. These are fun, gossipy books, perfect for summer! Crazy Rich Asians is being made into a movie, and I want to make sure to have them all read in plenty of time.
May 23

Before We Were Yours

by Lisa Wingate
From the publisher:
“Based on one of America’s most notorious real-life scandals—in which Georgia Tann, director of a Memphis-based adoption organization, kidnapped and sold poor children to wealthy families all over the country—Wingate’s riveting, wrenching, and ultimately uplifting tale reminds us how, even though the paths we take can lead to many places, the heart never forgets where we belong.”

This is going to be a difficult book to read because of the subject matter, but I can’t wait to read it anyway. It is based on a true story that sounds like it couldn’t possibly be true, which is makes it all the more horrifying. I’ve heard great things about this one, and a box of Kleenex will be nearby when I read it.
June 6

by John Grisham
From the publisher:
“A gang of thieves stage a daring heist from a secure vault deep below Princeton University’s Firestone Library. Their loot is priceless, but Princeton has insured it for twenty-five million dollars.”

The Ministry of Utmost Happiness

by Arundhati Roy
From the publisher:
“In a graveyard outside the walls of Old Delhi, a resident unrolls a threadbare Persian carpet. On a concrete sidewalk, a baby suddenly appears, just after midnight. In a snowy valley, a bereaved father writes a letter to his five-year-old daughter about the people who came to her funeral. In a second-floor apartment, a lone woman chain-smokes as she reads through her old notebooks. At the Jannat Guest House, two people who have known each other all their lives sleep with their arms wrapped around each other, as though they have just met.”

was published in 1997, so there is most definitely an excited buzz around this book. I love character-driven books, so I can’t wait to delve into the lives that Roy has shared with her readers. This is not going to be a fluffy summer read, but perfect to curl up with on a humid, rainy day indoors.
June 6

by Karen Kingsbury
From the publisher:
“When John Baxter is asked to relive his long-ago love story with Elizabeth for his grandson Cole’s heritage project, he’s not sure he can do it. The sadness might simply be too great. But he agrees and allows his heart and soul to go places they haven’t gone in decades. Back to the breathless first moments, but also to the secret heartbreak that brought John and Elizabeth together. At the same time, Baxter family friend Cody Coleman is working through the breakup of his complicated relationship with Andi Ellison. He is determined to move on when a chance sighting changes his plans—and heart. Can Cody convince Andi to give their love another try, or is it time for them to say goodbye for good?”

I haven’t read any of Kingsbury’s Baxter series, but this one sounds so good! Family sagas are great for any season, but if you have time to binge read a series during the summer, this one might be the one for it!
June 6

by Elin Hilderbrand
From the publisher:
“Just because twins look exactly the same doesn’t mean they’re anything alike–and Tabitha and Harper Frost have spent their whole lives trying to prove this point. When a family crisis forces them to band together–or at least appear to–the twins come to realize that the special bond that they share is more important than the resentments that have driven them apart.”

Hilderbrand is the queen of summer reads, and this year’s publication looks to be just as juicy and fun as her other books. This is high on my summer reading list, and I can’t wait to devour it by a pool!
June 13

The Seven Husbands of Evelyn Hugo

by Taylor Jenkins Reid
From the publisher:
“Evelyn Hugo is finally ready to tell the truth about her glamorous and scandalous life. But when she chooses unknown magazine reporter Monique Grant for the job, no one in the journalism community is more astounded than Monique herself. Why her? Why now?
Monique listens as Evelyn unfurls her story: from making her way to Los Angeles in the 1950s to her decision to leave show business in the late 80s, and, of course, the seven husbands along the way. But as Evelyn’s story catches up with the present, it becomes clear that her life intersects with Monique’s own in tragic and irreversible ways.”

So far, this is my favorite book of the summer. I absolutely loved it (Read my review of the novel HERE.), and I’ve added all of Reid’s books to my to be read list. This is a perfect summer read, but it’s not as fluffy as you might think. Be prepared to read this one from cover to cover in a couple of days, and to have the characters stick around in your head for awhile.
June 13

Seven Stones to Stand or Fall: A Collection of Outlander Fiction

by Diana Gabaldon
From the publisher:
“A collection of seven short stories set in the Outlander universe, never before published together, including two original stories. This riveting, romantic collection includes: “Besieged” (original novella), “Survival” (original novella), “Virgins,” “The Space Between,” “Lord John and the Plague of Zombies,” “A Leaf on the Wind of All Hallows” and “The Custom of the Army.””

It’s Outlander. What more do you need?! For all of us who are anxiously waiting for Gabaldon’s next Outlander novel, this is the perfect in-between book, full of short stories.
June 27

by Riley Sager
From the publisher:
“Ten years ago, college student Quincy Carpenter went on vacation with five friends and came back alone, the only survivor of a horror movie–scale massacre. In an instant, she became a member of a club no one wants to belong to—a group of similar survivors known in the press as the Final Girls. “

This is the debut novel from Riley Sager . . . but not really, since it’s a pseudonym for a previously published author. There’s another mystery to be solved there. 10 years after the Sack Man went on a killing rampage, it appears that he is targeting the Final Girls. Will they be able to escape a second time? I’ll be reading this one with ALL the lights on!
July 11

by Janelle Brown
From the publisher:
“It’s been a year since Billie Flanagan—a beautiful, charismatic Berkeley mom with an enviable life—went on a solo hike in Desolation Wilderness and vanished from the trail. No body—only a hiking boot—has ever been found. But then Olive starts having waking dreams—or are they hallucinations?—that her mother is still alive. Together, Olive and Jonathan embark on a quest for the truth—about Billie, their family, and the stories we tell ourselves about the people we love.”

I’m in the middle of reading this one, and it is quite the page-turner! Brown slowly draws you into the story so that you are fully invested in finding out what happened to Billie, and why Olive is seeing her mother’s . . . ghost? Or something else?
July 11

by Ruth Ware
From the publisher:
“Something terrible has been found on the beach. Something which will force Isa to confront her past, together with the three best friends she hasn’t seen for years, but has never forgotten. Theirs is no cozy reunion: Salten isn’t a safe place for them, after what they did. At school the girls used to play the Lying Game. They competed to convince people of the most outrageous stories. But for some, did the boundary between fact and fantasy become too blurred?”

The flap copy for this one is sparse, and I think it is so for a reason. Sometimes it’s better to go into a book not knowing much about the plot, and Ware’s books are definitely in that category. After In a Dark, Dark Wood

and The Woman in Cabin 10

by Louise Penny
From the publisher:
“When a mysterious figure appears on the village green on a cold November day in Three Pines, Armand Gamache, now Chief Superintendent of the Sûreté du Québec, knows something is seriously wrong. Yet he does nothing. Legally, what can he do? Only watch and wait. And hope his mounting fears are not realized.”

If you are a Louise Penny fan, you’ve probably already pre-ordered her thirteenth novel in the Inspector Gamache series. I’ve been putting off reading her first, Still Life

, because I know I’m going to love them and want to read them all at once. This series will most likely be my binge-read this summer. Will I be able to read all 12 before this one comes out??
August 29