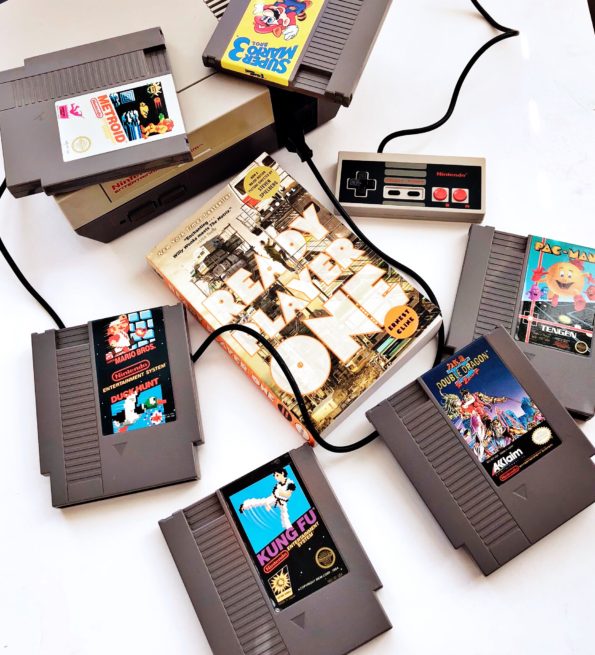 . . . I’d come to see my rig for what it was: an elaborate contraption for deceiving my senses, to allow me to live in a world that didn’t exist. Each component of my rig was a bar in the cell where I had willingly imprisoned myself.

Imagine a world in which human interaction is minimal, the country is falling apart, and people would rather disappear into a digital world rather than live in the real world. Well, maybe this scenario isn’t as hard to visualize as it might have once been. Ernest Cline, the author of Ready Player One

, imagined just such a world, in 2044, and as I read this book I kept thinking that Cline’s reality isn’t as farfetched as we might think. This is a really fun, interesting science fiction novel that I think anyone, even if you don’t usually read science fiction, will enjoy.

Wade Watts is a teenager living in the disastrous time of 2044. The country has fallen apart, people live in RVs and mobile homes piled on top of each other, known as stacks, and the only way to escape is in the virtual world known as the OASIS. In the OASIS, people are known by their avatars and made-names-you can be anyone you want to be. Kids go to school there, if you have money you can explore different virtual planets, and, most importantly, everyone can ignore the mess of the real world. When the founder of the OASIS (who was obsessed with 80s culture-this is extremely prominent throughout the entire book) dies, instead of leaving his fortune to someone, he announces through a video that he has devised a game full of puzzles and clues. Whoever solves all of the clues will win his fortune. And so begins the massive treasure hunt, with people who are willing to kill in real life to get that treasure. Wade, an OASIS expert, has to confront difficulties in both the virtual and real worlds to win the treasure . . . and avoid destruction.

This was published in 2011, and I think it’s even more relevant today. Don’t we all live in our cell phones, to varying degrees? I mean, there are apps to track our phone usage so we can try and cut down. We lose ourselves in the Pinterest-perfect worlds we find online and have to remind ourselves to come up for air. And that it’s not real. Cline explores what our world might look like if we took that obsession a bit further and really inserted ourselves into a virtual world, including the positive aspects and major pitfalls. As I said, this book is so much fun-the 80s nostalgia, sarcastic characters, fantastic virtual battles, and the enduring theme of good vs evil (and what actually IS good and evil) all make this book a great combination of sci fi, adventure, and surprisingly thought-provoking moments. The only problem I had was at the very end. I wanted . . . more. It’ll spoil the book to say anything else, but it’s such a small problem, and I’m glad I read it!

was a surprising read for me-I like sci fi but I avoided this one for awhile. I am so, so glad I finally picked it up! I raced through it, and if you like any type of adventure story I think you’ll like it too.