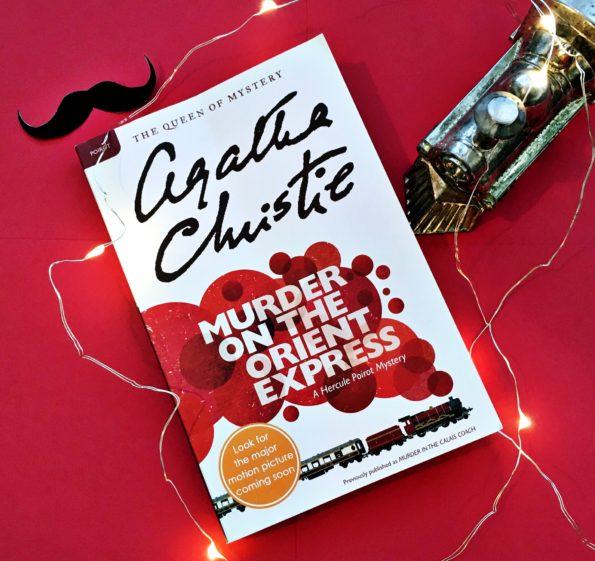 Murder on the Orient Express

is the ninth book in the Poirot series (you do not have to read them in order). If you’re not familiar with them, Hercule Poirot is a Belgian detective with an excellent mustache and even better deductive skills. This book reminded me why I love Christie, and my 2018 book goals will definitely include reading more.

As you can probably guess, the entire story takes place on a train, the Orient Express. Just after midnight, the train runs into a snowdrift and stops, stuck on the tracks. Within a few hours, one of the passengers is dead, stabbed multiple times inside his locked room. Poirot is called on to figure out who among the remaining passengers is the killer, and what their connection to the victim is.

Agatha Christie isn’t know as the Queen of Crime for nothing. The format of this book is so simple-it is set up in sections: the setting, the crime, the evidence, the resolution-but so effective. The reader gets to go through the entire crime-solving process right alongside Poirot, watching “the little grey cells of the mind” at work. It’s an incredibly satisfying way to read a mystery. It’s straightforward, with little twists and turns throughout, but not enough to become frustrating. (I also love seeing how Poirot’s counterparts, in this case M. Bouc, become exasperated by how fast Poirot’s mind works, and how he de-bunks every theory they have.) The story itself is so well written, and while some of the language is a little outdated, I think it still stands up to any modern day mystery.

If you’re looking for a suspenseful cozy mystery or a quick winter read, I highly recommend Murder on the Orient Express

. And if you haven’t watched any Hercule Poirot movies, look for the ones with David Suchet. He’s the only person I picture when I read the books!