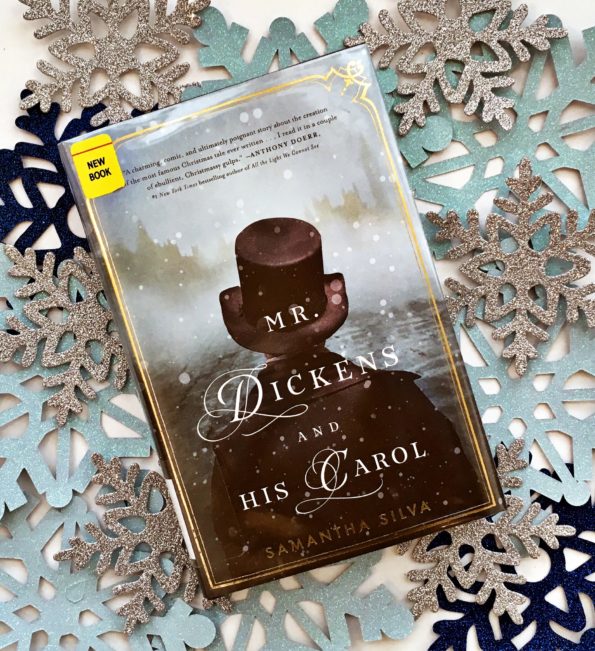 Mr. Dickens and His Carol

I have been dying to get my hands on this book for what seems like forever. It’s been much hyped in the bookstagram community, so when my library hold finally came in I rushed right over to get it. I enjoy reading holiday books, but I don’t generally go for the plucky, romantic books. (But you can bet I’ll be watching Netflix’s A Christmas Prince real soon.) Samantha Silva’s Mr. Dickens and His Carol

is not that kind of book (although it is a wonderfully sweet story), and I absolutely loved it. If you’re looking for a well-told, historically-based holiday story, this is it!

. . . for the truth at the bottom of every illusion, every fiction, every lie: our own great desire to believe.

Mr. Dickens and His Carol, part fact part Silva’s imagination, begins with Charles Dickens himself in a holiday slump. He is sick of Christmas excess, sick of his family and friends always needing money from him, and sick of his publishers hounding him to write a Christmas book he doesn’t want to write. (And giving him only two weeks in which to write that book.) He isolates himself in a hotel room to write the book, for which he has little inspiration, and spends his nights taking long walks around London to try and clear his mind. On one of his walks, he meets a mysterious woman named Eleanor Lovejoy who challenges Dickens to re-think what he believes about Christmas, family, friendship, and love. Their friendship sparks a Christmas story that changes everything.

This is a feel-good story that isn’t cheesy. Dickens wants to believe in the spirit of Christmas again but is unable to because of all the pressure placed on him by everyone around him. That’s something we can all relate to on different levels. In her Author’s Note, Silva includes which parts are completely true, including the situation (A Christmas Carol

was written out of financial necessity, and Dickens was under immense pressure) and some of the characters’ lines. She fills in the gaps to create a magical, sentimental story of how Dickens may have been inspired to write this story in her imagination.

This a beautiful story of love and family, of the Christmas spirit, and of a man who needed to find himself to break a serious case of writer’s block. I want to know more about Dickens and the history of A Christmas Carol now, and I’m already looking up more books about the subject! (There’s also a great twist that completely surprised me because I was so caught up in the story and how good the writing was. I didn’t see it coming at all!) Mr. Dickens and His Carol

is a perfect holiday read, and I would recommend it to anyone.