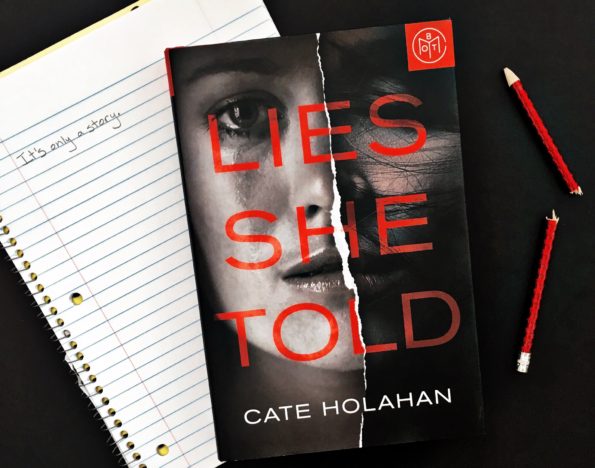 To be a writer is to be a life thief. Every day, I rob myself blind.

When I saw that my friend Stacey at Prose and Palate was a guest judge (AGAIN, because she’s amazing) for Book of the Month, I knew I would selecting whatever book she recommended. So there was no question that for September, my choice was Lies She Told

by Cate Holahan. I read this suspense novel in two days, and believe me when I say that I hardly ever read a book that fast. It was so engaging and tense that I couldn’t put it down until I had finished. (Including telling my kids to wait a minute before I read to them, because I had to finish MY book first!)

It’s only a story.

Liza is a novelist whose latest book sales aren’t fantastic. Her publisher is giving her one more chance to write a bestseller, and she doesn’t have time to do it. She and her husband are also trying to start a family, and her husband’s best friend and law partner has disappeared. To cope, Liza disappears into her novel, writing about her main character, Beth. Beth has a new baby and a cheating husband. Her plan of confronting him about it goes awry, and before she knows it, she’s pushing the mistress’s body into the East River. Before long, Liza’s and Beth’s lives intertwine, and Liza has to figure out what is the truth, what is fiction, and whose story she’s really in.

I was hooked on this book from the very beginning. The story is told in alternating chapters between Liza and Beth. Holahan expertly writes the Beth and Liza chapters so that they become entwined, and I kept forgetting which woman I was reading about. It wasn’t frustrating, though, and it added to the tension in a really good way. (The font used for each character’s chapter is different, so there’s always a reminder.) She puts just enough pressure on the characters, both real and fictional, that you feel the tension as they try to figure out what to do. The twist was great, and while I did figure it out before the ending, it really didn’t bother me because I was having such a good time reading and going along on the adventure with Liza and Beth.

There were a few editorial misses (a name changed mid-paragraph, some words were left out) that made the editor in me cringe, but I was ok with ignoring that because I had to keep reading!

is a fantastic suspense novel, and if you’re a fan of this category, I think you’ll love this one!