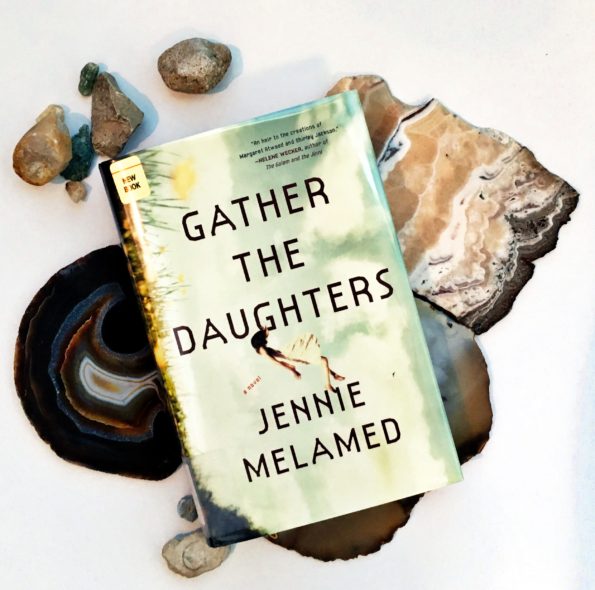 I hesitate to even write a review about this book because I just want you to read it without any spoilers! Jennie Melamed’s Gather the Daughters

, but also adds a new angle to this genre. I love dystopian stories, and haven’t seen one like this in awhile.

Gather the Daughters takes place on an isolated island, a place that was founded after the country (the Wasteland) was supposedly incinerated by fire. The original ten men and their families created the rules and no one except the ten men and their descendants, called the Wanderers, are allowed to leave the island. The women on the island are raised to be wives and breeders. The only freedom they have is during the summer as children, when they are allowed to run free and wild until they reach puberty. At the end of one summer, Caitlin Jacobs sees something she shouldn’t, and it is so horrific that she cannot ignore it. 17-year-old Janey Solomon, who is starving herself in order to delay puberty, takes it upon herself to lead the girls away from their families and to discover the truth about the island. The young daughters realize that the way they’ve been treated isn’t right, but aren’t sure if they’re strong enough or smart enough to actually make it off the island. Will they be able to change their collective fate, or will the status quo hold strong?

I was both obsessed with and disturbed by this book, and I stand by that. Has this basic plot been done before? Yes, but not exactly like this. It’s been awhile since we’ve seen a dystopian novel quite like this, and Melamed has made a great addition to the genre. The story is haunting, disturbing, and gripping, and is an absolute page-turner. Melamed has taken what has become an extremely relevant topic today (a governing body of men having 100% control over women’s bodies) and turned it on its head, in an extreme way. This book will have you cringing, yelling at the characters, cheering them on, and, ultimately, hoping against all hope that the daughters just. Get. Out.

EXTRA!
This book does need a few disclaimers. Melamed, a psychiatric nurse practitioner who works with traumatized kids, covers some serious and disturbing subjects in Gather the Daughters, including abuse, incest, and some disturbing mating rituals. If any of these are triggers for you, this might be a book to skip!

EXTRA EXTRA!
I started out listening to this as an audiobook, but since it definitely wasn’t appropriate to listen to around my kids, I finished it by reading it, because I couldn’t wait to find out what happened. I think both versions are great, and if you like audiobooks, the narrator for this one does a great job. Her voices for the characters are fantastic, and she herself has a very sweet voice, which makes listening to the story even more disturbing.