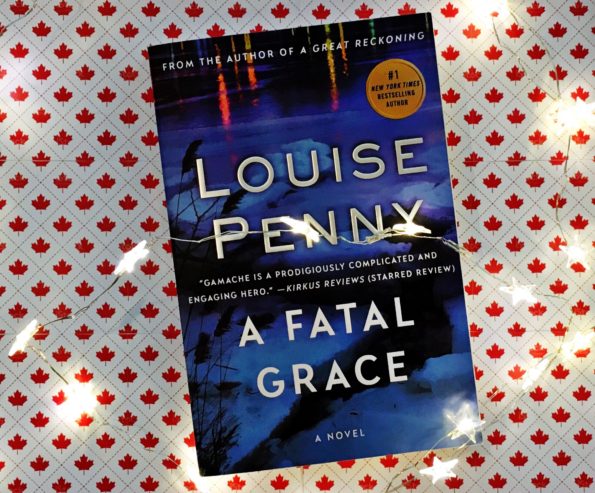 Gamache was the best of them, the smartest and bravest and strongest because he was willing to go into his own head alone, and open all the doors there, and enter all the dark rooms. And make friends with what he found there.

is the second book in Louise Penny’s Inspector Gamache series, and it’s even better than the first. I am completely hooked on this series, and I want to read all of them as fast as possible. (I bought the next book in the series a couple of days after finishing this one.)

This book takes us back to Three Pines with another mysterious death. This time, CC de Poitiers has been electrocuted in plain site at a curling match. (Does it get any more Canadian than that?) Somehow, no one saw anything, and no one is too upset that CC is dead. Chief Inspector Armand Gamache is called in to investigate, and he soon realizes that something very strange is going on, and the people of Three Pines may know more than they’re letting on.

was a slow build, A Fatal Grace is more fast-paced right from the start. The characters are really starting to develop, and there is an overarching mystery involving Gamache and a past case that is becoming more prevalent. (And I believe it will continue throughout the rest of the series.) I love seeing how the characters are growing and changing, and how they become involved in solving the mystery. And while it may seem unbelievable that yet another murder takes place in a small town, Penny makes it completely believable, and I didn’t have to suspend my belief at all. Everything is connected.

Gamache is one of the best detective characters I’ve ever read, and I love him more with each book. In my review of Still Life (Read that review HERE) I said that I keep thinking I’ll run into him because he’s so well written he seems like a real person. I still feel that way, and I’m kind of disappointed that I’ll never be able to actually meet him.

is another fantastic cozy mystery in the Inspector Gamache series, and it’s even better than the first. This book takes place during the Christmas holidays, so if you’re a seasonal reader, now is the perfect time to get started on this series. (Still Life takes place over Canadian Thanksgiving, so if you haven’t read this series, start now!!) I loved this book, and I’ll be sitting down with the third book very soon.

As with Still Life, A Fatal Grace features the most delicious food, and I wish more than anything that I could sit down for a meal at the local bistro in Three Pines. During the off murdery season, of course. This is such a great series for a book club, especially if you want to tie food in to your meetings. Cozy mystery and great food? That’s all I want for Christmas.